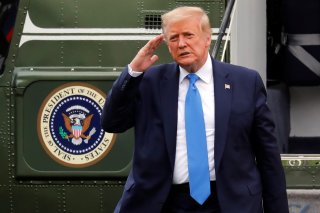 Trump Jr. said that the media “has totally abdicated their position to objectively look at both sides” and are ignoring any negativity surrounding Biden and his reputation as a potential president.

“They want to do whatever they can to keep the American people from actually seeing Biden. He hasn't been defined,” Trump Jr. said on Fox’s “Sunday Morning Futures.” “And the media is trying to make sure that no one gets to define Joe Biden, because once he is, you'll see how terrible this notion could be for America.”

Biden leads by nine points in an average overall poll posted by RealClearPolitics as the presidential elections are approaching in November. Another poll, conducted by the Dallas Morning News/University of Texas at Tyler in late June, showed that Biden has a five-point lead in Texas over Trump.

The polls reveal that the country disapproves of Trump’s handling of the coronavirus pandemic.

Trump Jr. also blasted Biden for using politics and public spotlight to promote his own family. He publicly questioned why the media hasn’t focused on this.

“You know that Joe Biden can sell this notion of ‘now we're going to be ‘buy American’ after 50 years of legislation that sent our jobs, that sent our American Dream, to China,” Trump Jr. said. “It's asinine.”

Biden’s proposal is similar to Trump’s “America First” as it focuses on boosting domestic manufacturing and production and adding more jobs to the market. Trump said Biden “plagiarized” his ideas and economic plans while he was speaking to reporters at the White House on Friday.

The “Build Back Better” plan calls for $400 billion in manufacturing sectors like clean energy, infrastructure and the workforce and $300 billion on technological research and development. He also promised 5 million more jobs and seeks to raise the minimum wage to $15 per hour.