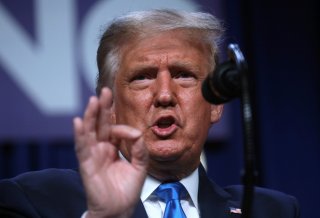 “I’ve watched most of the last hour and a half and what really strikes me is that while we’re calling this a Republican convention, it’s really the Trump convention,” Wallace, host of Fox News Sunday, said.

"The most recent Republican president, George W. Bush, won’t be making an appearance this week. Over the weekend, the Republican National Committee announced that because COVID is limiting the attendance of delegates they’re not even going to pass a platform but they pledge support for the president’s America First agenda," he added.

Wallace noted that first lady Melania Trump will take the convention stage, as well as his four children. Cabinet members and White House staff are also slated to speak during the next three nights of the convention.

President Donald Trump is expected to speak on all four nights of the convention, a move that Wallace referred to as “unprecedented.”

"He seems to have made the calculation that the best spokesman, the best salesman for Donald Trump is Donald Trump, and for the Trump base, the millions of voters out there who voted for him in 2016, who plan to vote for him again, he’s probably absolutely right,” he said.

Karl Rove, a former strategist for Bush, also commented on the convention during the network’s live coverage, emphasizing the use of non-political speakers backing Trump. Some of these types of speakers include former NFL player Herschel Walker, Andrew Pollack, father of a child killed in the shooting at Marjory Stoneman Douglas High School, and public school teacher Rebecca Friedrichs.

“I thought some of the most powerful moments tonight were not the politicos, they were people like Herschel Walker. I was taken by the father of the Parkland shooting victim. I was taken by the group of first responders and everybody from a truck driver to nurses,” Rove said.

Earlier Monday, more than twenty former Republican members of Congress initiated the “Republicans for Biden” movement to elect Democratic nominee Joe Biden in November. The effort is being launched to encourage other GOP members on Capitol Hill to join in rejecting Trump’s reelection bid.

On Monday night, former U.S. Ambassador to the United Nations Nikki Haley, Donald Trump Jr., and Sen. Tim Scott (R-S.C.) spoke in support of the president. On the second night of the convention, Tiffany and Eric Trump, the daughter and the son of the president, respectively, the first lady and Secretary of State Mike Pompeo are expected to appear on stage and give speeches.