The Ghosts of 2016 Haunt Joe Biden and Donald Trump 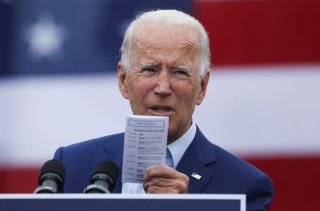 Less than 60 days out, there are two ways to look at the state of the race between President Donald Trump and Democratic challenger Joe Biden.

One is to look at the eight or so swing states that matter most in terms of who will win in the Electoral College and see it, as Politico did recently, a “battleground haunted by the ghosts of 2016.” The other was advanced by Republican pollster Patrick Ruffini. “It’s pretty simple,” he tweeted. “Biden leads by 7 in the polling averages. Accounting for uncontested races, Dems won the midterms by 7. Trump approval has been pretty much a flat line for 3.5 years. We don’t need to make this more complicated than it is.”

The case for Ruffini’s view: Biden has been in the lead for months now. Trump, the incumbent, is running out of opportunities to fundamentally change this dynamic. The Republican convention, which went as well as could reasonably be expected, did not do so. It may be asking too much to expect the debates to be the game-changer. The national right track/wrong track numbers are dismal and there would seem to be more than enough pressing national problems — a pandemic, economic downturn, civil unrest — to wipe out the 80,000-vote Trump lead in Pennsylvania, Michigan and Wisconsin from four years ago. In some reputable polls, Trump is not in fact especially competitive in any of these states.

Trump’s reelection campaign doesn’t quite have the same doomed feel as George H.W. Bush’s in 1992, or the similarly depressing efforts by Bob Dole in 1996 or John McCain in 2008. But it is close. Biden has so far been impervious to the kitchen sink approach — the radical liberal in the pocket of Wall Street, the soft-on-crime supporter of mass incarceration, the foreign policy weakling who votes for endless wars — that worked against Hillary Clinton.

But then there are the ghosts of 2016. The conventional wisdom wrongly assumed, largely based on polling, that Trump had no chance closer to Election Day than we are right now. The “Access Hollywood” tape looked like a successful October surprise that might lead respectable Republicans to sit out the race if they couldn’t toss Trump from the ticket.

That was then, this is now, of course. It is possible voters will conclude that we have had our fun, if that is the right term, for the last four years but now we live in serious times that require the calming presence of a throwback to Barack Obama or some other bygone era of Biden’s nearly five decades on the national scene.

But if you strain hard enough, you can see reasons for nagging doubt. Trump is once again doing a bit better in the battleground states than he is nationally. Averages aside, some polls show Florida and Pennsylvania tightening, and not necessarily ones that rely on “shy Trump voters.” While pollsters accurately forecast the Democrats’ gains in the 2018 midterms, Ohio and Florida were two very important states where some statewide Republican candidates won in spite of survey data suggesting they might lose.

In 2016, the final national polls were only slightly off but the media was overconfident in the top-line numbers, which colored their analysis in ways that made them unable to see that Trump was closing the gap — and potentially well-positioned in the Electoral College, which constitutionally is what really matters. Many battleground state polls did generally understate Trump’s support and fail to capture late deciders breaking for him.

If Trump winds up within striking distance in these states again and the polls are similarly undercounting his supporters, could there be a repeat? And while few think he will win the popular vote, is it inconceivable he cuts Biden’s national lead in half? This is without even contemplating the challenges of polling in a pandemic and with mass mail-in voting, though the industry had no major mishaps this year in primaries or special elections.

If 2016 had never happened, the idea would be as readily dismissed as the notion that the polls were “skewed” against Mitt Romney in 2012. But it did happen, and most political journalists have spent precious little time on the campaign trail this year due to the pandemic — even much of that in unrepresentative states or at small events — to augment their understanding beyond what the polls show.

Maybe Trump, like Obama before him, once again turns out voters who didn’t show up to boost his party’s candidates in the midterms. Maybe we haven’t really learned the lessons of 2016.