History Proves Counting Donald Trump Out Is a Big Mistake 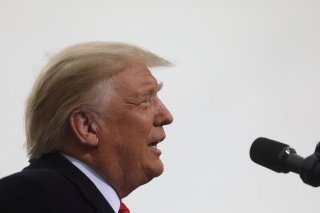 History seldom repeats itself verbatim. But it often offers variations on a theme. Consider the case of “The Buffoon versus The Man with the Resume.” I refer to a presidential campaign in which a crude, controversial and widely disliked incumbent president faced off against an experienced challenger with a long record of public service and a cozy relationship with the coastal power elites and mainstream media of the day. At the time, all of the smart money was convinced that The Buffoon was doomed, and The Man with the Resume was going to win by a landslide.

And that’s exactly how the campaign played out for many weeks. The establishment press treated the Man with the Resume with kid gloves, as if he were already president-elect. All of their scorn was concentrated on The Buffoon, the bumptious incumbent who was the butt of all establishment jokes and was barely considered human in fashionable circles.

But as the campaign progressed, something interesting happened. Voters who had been continually bombarded by the mainstream media’s one-sided coverage of the campaign reached the saturation point on reasons why they should vote against the Buffoon. And they began to look a  little more closely at The Man with the Resume. Many of them concluded that he was not so much a man as an empty suit. Meanwhile, The Buffoon barnstormed the country with a populist message, drawing big crowds but few editorial endorsements.

When The Buffoon went to bed election night, the mainstream media was still expecting The Man with the Resume to win. But, by the wee hours of the morning, Thomas Dewey—The Man with the Resume and the media’s presumptive president-elect—was just another unemployed candidate. The Buffoon, Harry S Truman, had pulled victory out of the jaws of defeat.

Joe Biden is no Thomas Dewey and Donald Trump is no Harry Truman, but their 2020 battle is in many ways a variation on the theme of that 1948 election. Today’s mainstream media and financial and coastal elites are as overwhelmingly Democratic now as they were overwhelmingly Republican sixty-eight years ago. But, now as then, they may have overplayed their hand and inadvertently helped the man they loved to hate: Harry Truman in 1948 and Donald Trump in 2020.

In 1948, Truman managed to flip the dynamic of the election in its final phase. Suddenly, it was Dewey and Dewey’s vulnerabilities that people began to focus on after months of Truman-bashing in the media. The second Trump-Biden debate may have triggered the same role reversal in the last days of the current campaign.

If Joe Biden proved anything in the second debate, it was that he can hide but he can’t run.

He emerged from his basement dazed, wobbly, and barely able to string the stale cliches of his talking points together. By contrast, Trump repeatedly honed and targeted his bread and butter, anti-establishment message to connect with potential swing voters—many of them working class—in the key states that matter the most, e.g. Texas, Florida, Pennsylvania, Ohio, North Carolina and the Heartland.

Trump looked, sounded and behaved much better than in the first debate whereas Biden was pretty much the same moth-eaten old Joe. He repeatedly glanced at his watch and lost the strand of his rather meager thoughts. He seemed old, tired and not quite all there. It was as if he, not Trump, was the one who had just recovered from the coronavirus. And Biden’s tone was downbeat and defeatist, all about things getting worse and America heading into a “dark winter” with people dying like flies, losing their jobs, their homes and their medical coverage. That is not where most Americans are.

By contrast, Trump did something very uncharacteristic and very smart. He obviously critiqued himself after his sub-par performance in the first debate, learned from it, and, unlike Biden, markedly improved his game. The election still may be Biden’s to lose. The second debate may have been the tipping point. Donald Trump came across as a strong, energized and optimistic leader. Biden did not.

And then there are the numbers. There are polls pointing in every direction of the compass, but the current trend in many has Trump closing the gap or inching into the lead in crucial swing states. While Biden is probably the mathematical favorite in the race as it enters the final stretch—just as Hillary Clinton was in 2016—here’s something to think about:

Trump could still win an electoral college majority with a considerably weaker popular vote margin than he had four years ago.

For example, Trump could lose a large chunk of his popular vote margin in a state like Iowa (where he won by a double-digit margin last time) and still win there, leaving his electoral vote tally intact. The same thing is true on a much larger scale in a state like Texas and most of the southern states. Similarly, Biden could actually increase the Democratic popular vote margin in states like California, New York, Massachusetts, New Jersey and Illinois without adding anything to his electoral vote strength.

In the end, this election will probably be decided by a handful of swing states. And in almost every case, these are the very same states that most of the pollsters and pundits were badly mistaken about in 2016, invariably underestimating Trump support.

No one really knows what will happen this time but perhaps Joe Biden should be more than a little nervous.