History Tells Us Donald Trump Can Beat Joe Biden. The 1988 Election Proves It. 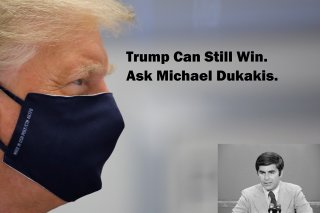 Michael Dukakis, former Democratic presidential candidate who lost the 1988 election against then-Vice President George H.W. Bush, cautioned presumptive Democratic nominee Joe Biden that dominating the polls is “no guarantee of success” -- as Dukakis led by a 17 percent nationwide margin, but failed to get the White House bid.

“Particularly this year, [polls] should be studied cautiously. Biden can and should win, but being at 50, no matter how weak your opponent is, is no guarantee of success,” Dukakis told the Globe.

Despite his popularity in the polls, Dukakis ended up losing the popular vote and the Electoral College. Bush took home 40 states -- no president has been able to rally this much Electoral College support since 1988.

Less than six months before the 1988 elections, The New York Times published a headline on the front page titled, “Poll Shows Dukakis Leads Bush: Many Reagan Backers Shift Sides.” The article detailed polls that Dukakis advanced in and noted key issues that voters believed then-President Ronald Reagan and Bush “performed poorly” on handling, such as drugs.

“Democrats generally and Mr. Dukakis, in particular, were seen as more likely to deal with the problem effectively than were the Republicans and Mr. Bush,” The Times wrote.

Voters also said they have more “trust” in Democrats and Biden in handling the coronavirus, according to a Morning Consult/POLITICO survey taken in late June.

Media outlets nationwide predicted Bush’s defeat, similar to what Trump is experiencing for the elections that are less than 100 days away.

Dukakis’ candidacy, however, took an intense tailspin after a series of notable remarks that tarnished his reputation. At the second debate, the Democratic nominee said he wouldn’t support the death penalty even if his wife was abused, raped or murdered, a response that caused voters to question his “values and emotions,” Susan Estrich, his campaign director, told POLITICO.

Bush’s attack advertisement -- the Willie Horton ad -- also forced Dukakis to tank in the polls. The video featured Horton, an African-American man, who raped and murdered a white woman and stabbed her fiance while being furloughed under a Massachusetts program that Dukakis, former Massachusetts governor, had put in place during his office.

"Dukakis not only opposes the death penalty, he allowed first-degree murderers to have weekend passes from prison," the voiceover from the advertisement said.

The Democratic nominee also saw a decline in support following Reagan’s remarks about his psychiatric health, saying Dukakis is an “invalid,” but the then-president claimed he was kidding.

“I think I dropped eight points in the week Reagan called me ‘the invalid,’” Dukakis said in an email to the Globe. “I never took those early polls seriously.”

Trump has similarly questioned Biden’s mental health, referring to him as being “mentally shot” and “not competent to be president.”

Even though Biden appears to have a national poll lead over Trump, as Dukakis did over Bush, a lot can change between now and November.