How Important Is Trump's Lead On The Economy? 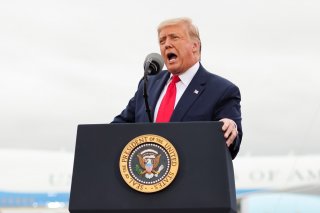 This week produced a plethora of new polls which confirm the stability of the presidential race, at least at the national level. Stability has been the story of the 2020 campaign since the summer began with Joe Biden consistently in the lead. As we move into the home stretch, it is important to look beyond those topline responses to assess candidate strengths and weaknesses on issues that will be important to voters.

In the latest issue of AEI’s Political Report, we looked at Donald Trump and Biden on a variety of issues. In those polls and in the new post-conventions ones this week, Trump continues to hold a lead on handling the economy. Biden leads on handling health care, although people are still uneasy about his ability to deal with COVID-19. In the new Economist/YouGov poll, 43 percent were uneasy about his approach, while 40 percent were confident. Absent an international crisis, the economy and health care are the issues that define presidential contests.

What explains Trump’s lead on the economy? Writing in the Monkey Cage*, Vanderbilt political scientist John Sides argues that “people who approve of Trump on the economy but not overall are mostly Biden supporters.” Using Democracy Fund + UCLA Nationscape data**, he looked at the roughly 11 percent of voters who give these responses and asked whether they would vote for Trump. The answer, according to Sides, is “probably not.” This group favored Biden over Trump by 60 to 19 percent.

As our new AEI report, “Jobs, finances, and work life on Labor Day,” documented, most Americans say their finances are stable. Half gave that response in an August Fox News poll, and an additional 16 percent said they were getting ahead. Thirty-two percent said they were falling behind. In the poll, 9 percent of Biden supporters said their finances were improving, 50 percent holding steady, and 39 percent falling behind. For Trump supporters those responses were 26, 55, and 19 percent, respectively. A new AP/NORC poll reported that a chunk of Americans are saving more than usual (45 percent) and paying down debt (26 percent). Two-thirds are spending less. Americans who are financially stable or doing better may be giving Trump credit for handling the economy, but as Sides suggests, they may still decide to vote against him in November.

High marks on stewardship of the economy are always important for the incumbent party, but they may not be enough for the GOP. We will have an answer very soon.

*The Monkey Cage is an independent site designed to connect political scientists to the political conversation. It is currently published at The Washington Post.

**I serve on the advisory board of this project.