Joe Biden vs. Hillary Clinton: Is Biden's Lead over Trump Any Stronger? 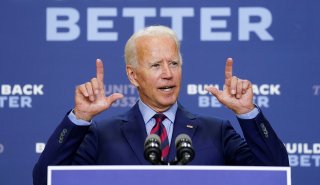 President Donald Trump is still dramatically behind in nearly all national polls against Democratic nominee Joe Biden in the home stretch of the 2020 election season, recalling comparisons to the 2016 race against Hillary Clinton (D), but her lead shriveled just a week before Election Day.

At this point four years ago, Clinton’s margin over Trump contracted, paving a clear path to a Republican victory in the White House. Biden’s average polling edge, however, hasn’t endured the same sizable downtick — yet — as he has maintained a steady lead over the president with more than 66 million Americans who have already cast their ballots and the number of undecided voters diminishing.

“Trump has been polling about the same as he did in October 2016. Biden is polling somewhat ahead of Clinton's 2016 polling numbers in October 2016,” Stephen Ansolabehere, a government professor and director of the Center for American Political Studies at Harvard University, said. “There are few undecided and third-party voters, so there has been less shifting in the polls this election.”

Ansolabehere added that in 2016, “There were a relatively high number of undecided voters and third-party voters going into October, and it took until the last week of the campaign to shake out. Trump did better than Clinton attracting those late-deciding voters.”

As of Tuesday, Biden has garnered a 7.4 percent national advantage over Trump, according to the RealClearPolitics (RCP) polling average of general election polls, as the former vice president’s support hasn’t hit below 50 percent once during the month of October.

Biden leads by 9.1 percent nationally over the president in the FiveThirtyEight average polling model, an edge that’s decreased by roughly one percent since the beginning of the month when Hunter Biden’s business relations with Russia first unraveled.

Although Biden’s lead slightly dwindled after the news of Hunter’s Russian dealings, it did not have nearly the same impact as the bombshell that was released 11 days before Election Day in 2016 that some voters believed destroyed Clinton’s chances in the White House.

Four years ago, former FBI Director James Comey announced that he was "investigating emails on Anthony Weiner's laptop that were potentially related to a probe of Hillary Clinton's use of a private server." There have been no October surprises revealed of comparable scope that would harm Biden’s chances of landing a spot in the Oval Office — yet.

At this point in the Trump-Clinton race, the former secretary of state led by 5.6 percent nationally, according to the RCP average polling model, and by 5.8 percent in the FiveThirtyEight data. Clinton’s margin over the president surpassed 50 percent only twice, and that was more than 150 days before the presidential election.

Although Biden has opened a clear advantage, John Fortier, director of the Bipartisan Policy Center’s Democracy Project, noted that the two presidential races are “not completely comparable,” because of the “different basket of pollsters and a different mix of third party candidates.”

“In general, there is likely some more possibility for movement toward Trump because of some lingering Republican undecideds and that VP Biden is slightly less well defined than President Trump, but it is late in the race, and the polls could move either way,” Fortier added.

In the most recent RCP polling average for the top battleground states — Wisconsin, Michigan, Pennsylvania, North Carolina, Florida and Arizona — Biden leads by a tight 3.8 percent, while Clinton held a 2.8 percent margin at this point in the 2016 race.

The former vice president has small leads in Florida, Pennsylvania, North Carolina and Arizona — all states that Clinton narrowly lost in 2016.

Ansolabehere noted that there was some bias in the polls in 2016 that overstated Clinton’s support in the upper Midwest, but said “the bias is not consistent across the US,” as 2016 Texas polls “overstated” support for Trump. This year — assuming pollsters “haven’t adjusted their methods of data collection and weighting,” although many have — Ansolabehere said there may still be some biases.

Despite potential biases in overstating Biden’s or Trump’s support in battleground states, it still “shows a much closer election with a slight advantage to Mr. Biden.”

The Trump campaign will make its mark on some of these battleground states during the final sprint of his campaign trail, as the president will visit Florida, Michigan and Pennsylvania, where polls are favoring his political opponent.

“Over this final week, I don't see much room for movement.  There are not a lot of undecided or swing voters left,” Ansolabehere said. “That said, very small movements in Florida, Texas, Georgia, Minnesota, Pennsylvania and Wisconsin will determine the Electoral College vote.”

Biden’s campaign is trying to turn generally red states blue, as he is expected to be campaigning in Georgia this week, while his running mate, Sen. Kamala Harris (D-Calif.), will visit Texas. In a recent Dallas Morning News poll conducted before the third presidential debate, Biden garnered a three percent advantage over the president in Texas, a state that hasn’t backed a Democratic presidential candidate in nearly 40 years. Biden still leads in Texas according to that same poll by two points.

Of course, the state of the race is much different. At the forefront of voters’ concerns lies handling the coronavirus outbreak and boosting the economy back to where it was pre-pandemic.

Biden’s favorability is also higher than Clinton’s was, as she assumed a universally negative net favorability rating in the final days leading up to the election. Those that didn’t like either presidential candidate tended to back Trump or didn’t vote at all, while voters with the same sentiment have tended to support Biden.

But Trump’s unexpected win against Clinton has Democrats cautious in trusting the general election polls. Pollsters say, however, that there hasn’t been a noticeably swift movement in favor of the president in the polls during the last few weeks compared to what happened in 2016.

“President Trump really needs to hammer home his message on the economy. COVID changed this election back in March. Back in January, everyone thought this would be an election about the economy, and Trump would win for sure. The performance of the economy over the first three years of his administration ought to be the centerpiece of his campaign in the final week,” Ansolabehere said.