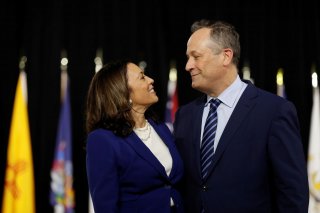 Senator Kamala Harris’s (D-Calif.) husband, Douglas Emhoff, has taken a leave of absence from his law firm, as Harris was named as Democratic nominee Joe Biden’s running mate for the party’s ticket in November.

Emhoff, 55, serves as an attorney at DLA Piper, a law firm based out of Los Angeles, and his profile on the firm’s website says, “Mr. Emhoff is currently on a leave of absence from the firm.”

Emhoff has worked at DLA Piper for nearly three years, where he specializes in intellectual property and technology, litigation, arbitration and investigations, as well as media, sports and entertainment.

“For over 25 years, Doug has proven himself in courtrooms and boardrooms across California and around the country. He represents large domestic and international corporations and some of today's highest profile individuals and influencers in complex business, real estate and intellectual property litigation disputes. Doug's influence and achievements as an insider across many spectrums has made him one of California's go-to lawyers for several decades,” the firm profile reads.

Emhoff is licensed to practice in both California and Washington, D.C.

If Emhoff returns to his job at the firm, his work “would conflict with federal policy that could be influenced by Harris if she is elected vice president,” The Washington Post reported. Emhoff would need to work with caution to make sure clients don’t sway Harris by hiring him.

“What you don’t want is for DLA Piper to become the law firm version of the Trump hotel in D.C., where people go and pay tribute,” Kathleen Clark, a law professor at Washington University, told the Post.

In one of his most publicized cases, Emhoff represented an advertising agency regarding a Taco Bell ad campaign that included a Chihuahua to market the chain’s products. The agency was pressed to pay a steep judgement, but Emhoff successfully argued for the penalty to be paid for by the fast-food chain.

Other experiences, documented on the firm’s website, include defending a group of production companies in an insurance coverage dispute, representing the rights holders of a famous animated character, prosecuting a trademark dispute for a renowned wine brand and representing over fifty commercial producers in an entertainment industry-wide wage and hour class-action lawsuit.

He’s also defended a studio executive in a lawsuit alleging breach of contract and fraud relating to a blockbuster film, represented a digital advertising agency in a trade secret and defamation action and represented a prominent former NFL and Olympic athlete in a civil action suit.