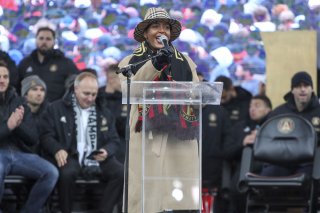 Atlanta Mayor Keisha Lance Bottoms—an avid supporter of presumptive Democratic nominee Joe Biden since the beginning of his campaign—has made her way to the top of Biden’s running mate shortlist, even though she isn’t well-known in the national spotlight.

The first-term mayor endorsed Biden over a year ago and stuck with him even when polling support tanked and his presidency was doubtful.

Bottoms has traveled across the country during the Democratic presidential race, rooting for Biden and his candidacy.

Bottoms has also been active in handling the coronavirus in her city, as she implemented a city mask mandate, despite the pushback from Georgia’s Republican Gov. Brian Kemp. The mayor has criticized Kemp for his coronavirus response efforts and lack of accountability.

After George Floyd was killed in by Minneapolis police, violent protests swamped multiple cities, including Atlanta, as stores were looted and buildings were ignited with fire. Bottoms ordered forceful protesters to “go home,” as their acts of violence destroyed the city and created a danger for its residents.

“If you care about this city, then go home,” she said. “If you want change in America, go and register to vote. . . . You are disgracing our city. You are disgracing the life of George Floyd and every other person who has been killed in this country.”

When asked if she’d be qualified for the vice presidential pick considering her role in Atlanta, she noted, “When you are leading a major city, you are dealing with a number of issues all at once; you’re dealing with the same issues that we're seeing across this country.”

Bottoms has also advocated against the “defund the police” movement that’s been chimed across the country, as she’s allocated about a third of the city’s budget towards police department funding.

Even though she feels confident in her candidacy, Democrats and other Biden supporters question if she’d be a strong pick to be the presumptive Democratic nominee’s running mate. Violence in Atlanta has persisted in recent weeks, under Bottoms’s watch, which has fumed questions as to whether Bottoms has the power and control to truly govern.

But, Bottoms has argued with this critique, claiming that Atlanta “is not out of control. And in fact, our crime numbers are even lower than they were this time last year.”

Other Democrats note that the mayor doesn’t have much national recognition, which could potentially hurt the party’s hopes at rallying additional votes following the selection of the vice president.