Mike Pence: Florida and Arizona are “Must Win” States for November 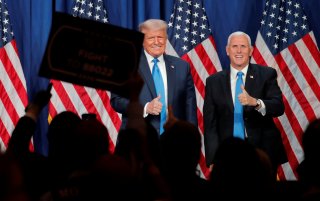 President Donald Trump has centered two top battleground states — Florida and Arizona — on the final sprint of his campaign trail to secure a win in November, according to Vice President Mike Pence.

As the vice president was aboard Air Force Two, Pence told The Hill in an interview that those two states, along with Minnesota—a state that hasn’t voted for a Republican presidential candidate in nearly five decades—are the president’s main states to win in order to continue his spot in the Oval Office after Election Day.

“We’re actually looking at expanding the map now. I’ve been campaigning in Minnesota. So has the president,” Pence said. “We think Minnesota is in play,” as he cited that Democratic mayors in the state have endorsed Trump.

Pence also referred to North Carolina as another focused state for the president’s campaign, as the race for support has narrowed with a margin between Democratic nominee Joe Biden and Trump at less than 1 percent, according to RealClearPolitics polling average for North Carolina.

The Hill reported that if the president fails to grapple support from Florida’s twenty-nine electoral votes or expanding the map by winning a blue state that voted for Democratic presidential nominee Hillary Clinton in 2016, the “Trump-Pence ticket would likely have to sweep Michigan, Wisconsin, Pennsylvania, Arizona and North Carolina to get to 270 electoral votes.”

But if Trump does gain a victory in the Sunshine State, then the president can take a couple of different routes to get reelected. The publication noted, “With wins in Florida and North Carolina, where polls show razor-close races, Trump could afford a loss in Arizona and get to 270 with wins in two of the three states of Michigan, Wisconsin and Pennsylvania.”

Although Pence boiled in confidence in terms of Trump’s reelection chances, Biden has a sizable lead over the president in Wisconsin and Minnesota, according to the RealClearPolitics polling average—both states that have been named top battlegrounds for the upcoming presidential election. In Wisconsin—a state that backed Trump in 2016, but voted for then-Democratic nominee Barack Obama in 2012—Biden has hovered around a five to six-point advantage over the president, and in Minnesota, the former vice-president has held a six to 10 point margin, the RealClearPolitics polling average for both of the states reported.

Other battleground states including Florida, Arizona, Pennsylvania and Michigan indicate a tight race for the presidency, as Biden leads by less than five percent in all three states on Wednesday. Pence noted during the interview particular trust in Wisconsin, Michigan and Pennsylvania to support the Trump-Pence ticket in November. Back in 2016, Trump won the electoral votes from Florida, Arizona, Pennsylvania and Michigan, but all except Arizona voted for Obama in 2012. Arizona, however, has recently elected a Democratic senator.

Pence also met with The Hill on Monday after visiting Wisconsin and Montana. He spoke about the upcoming election as well as the vice-presidential debate that he’s preparing for against Sen. Kamala Harris (D-Calif.)

“I don’t think I’m preparing any differently,” Pence said. “Certainly, I see . . . a vice presidential debate as an opportunity to draw a contrast between the president and Joe Biden. And I know the president’s record. I’ve been there every step of the way.”

The first presidential debate between Trump and Biden will take place on Sept. 29, while nearly one week later, Pence and Harris will go head-to-head on the debate stage. Democrats and debate critics are exhilarated to see the two battle, as Harris is a tough debater considering her experience during the Democratic primaries and when she was attorney general in California.

“She is certainly an experienced debater,” Pence said of Harris. “So we’re preparing in the same way we prepared the last time.”

Pence—leader of the White House task force on the coronavirus—also applauded the administration’s response to the pandemic, an issue that’s swung former Trump supporters to back Biden in November because of the president’s lack of leadership. Trump’s handling of the virus has been rejected, as there have been almost two hundred thousand fatalities due to the virus, with millions of Americans infected.