The Next U.S. Administration Should Start Rebuilding the Transatlantic Alliance With the UK 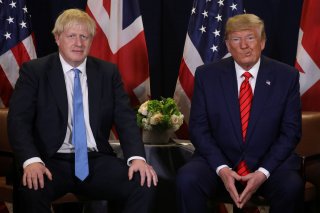 The American-led Western alliance is in a perilous state after four years of President Donald Trump’s inattention. Throughout this period, and for the foreseeable future as things stand on the geopolitical chess board, the UK remains America’s most steadfast and most natural ally. It is only logical that efforts to rebuild the West must start with London.

On all current projections, Vice President Joe Biden seems to be destined for the White House this November, atop an electoral Blue tsunami. If that comes to pass, the new administration will have their work cut out for them to repair the damage of the past four years to America’s global standing, and rebuild the alliances and the trust upon which American global pre-eminence has rested since World War II.

All of America’s natural relationships—with Europe, with the East Asian ring of fire around China, with its traditional Middle Eastern allies—will have to be reset and rebuilt upon a basis of mutual respect, understanding, and shared interest. But the pivotal supranational structure for the American national interest remains NATO, and both within the structures of NATO and outside, the UK remains America’s closest ally.

The UK currently finds itself in a very interesting position as well. Brexit created global uncertainty—both economically and as it concerns the country’s international diplomatic standing. And it is not yet complete. Despite the pressure it has been under, the UK government has done things on the international stage that were both unexpected, and far more aligned with U.S. interests than any other country.

The most notable example is how Britain offered a pathway to UK citizenship to close to three million Hong Kong citizens in the aftermath of the new National Security Law, which effectively annexed the territory and scrapped the “One Country, Two Systems” arrangement that the island previously enjoyed. That was a dramatically more substantial response to the snuffing out of one of Asia’s most successful democracies than anyone else, including the United States, has mustered. And this was against a context in which many expected London to be actively courting China for future trade opportunities after Brexit. Instead, they have taken a morally commendable and incredibly brave course of action.

Add to that the recent scrapping of Huawei from UK telecoms infrastructure and the fact that the UK has, in recent months, also been the most vocal of our partners against the genocide Beijing is perpetrating in Xinjiang province against the Uyghur minority, and London emerges as by far the bravest, most principled and most closely strategically aligned partner we have anywhere in the world.

But the UK’s new geopolitical positioning stands out as both brave and, in some instances, more closely aligned to U.S. national interest than even the current administration, even in areas where they cannot expect to have had the implicit backing of Trump. On Russia, a subject on which Trump has been notoriously soft, the UK has pressed ahead with their very own Magnitsky Act in recent months, and continues to rebuff robustly and effectively Russian testing of the country’s airspace and maritime borders.

All this stands in sharp contrast to the more ambivalent stances on both China and Russia that other Europeans and even some of our traditional Middle Eastern and East Asian allies have taken. The European Union in particular has dithered in calling out Beijing’s persecution of the Uyghurs or Putin’s annexation of neighbours, as their overriding objective is to secure a post-coronavirus economic recovery. For that, the lucrative relation with Beijing and energy relation with Moscow is critical.

The United Kingdom right now stands out as a country that is doing all the right things on its own accord, even though it might hurt them financially in the short term. This must be recognised, and dare I say, rewarded. Most of our other allies seem to be committed to our values and our global interests in a well ordered global political space only so far as they can rely on us to back them up and take them there. A reinvigorated U.S.-UK alliance should be the foundation and first step to demonstrate this new commitment.

The United States and the United Kingdom are currently negotiating a trade deal that, in the mind of the government in London, will become the keystone to their future geopolitical standing. As Washington is looking to rebuild its standing and its friendships in the world, this new trade deal should be characterised by the spirit of generosity of the Marshall Plan which won both the United States and the UK the role of leaders of the free world after World War II. As we try to rebuild our world, our allies and would-be friends should once again be able to trust that America values, supports, and rewards its friends. And they should be able to trust that we will be the most reliable partner they can find. What better way to demonstrate this but with a friend that has remained true, both to our shared friendship and our shared values, even as we ourselves have not.