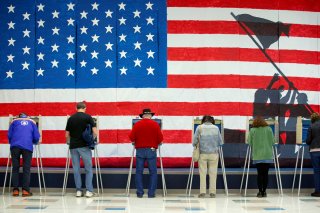 House Ways and Means Committee Chairman Richard Neal has led Congress’s push to obtain Trump’s tax records, as he requested them from the IRS in April 2019—which the president’s administration firmly rejected, initiating Neal to file a lawsuit to demand the tax returns under a law that permits the heads of Congress’s tax committees to be seemingly unrestricted in terms of viewing tax information.

“In terms of dealing with the courts now, he [Neal] has been strong and persistent and doing exactly what the lawyers say that we have to do in order to prevail,” she said. “He could not do anything more.”

“We are at the mercy of the courts,” Pelosi said.

Pelosi’s remarks come as Neal—a Massachusetts Democrat—approaches a difficult primary next week against Alex Morse, the mayor of Holyoke—a town in Neal’s district. Morse has the backing of several progressive groups, as well as the endorsement by liberal Rep. Alexandria Ocasio-Cortez (D-N.Y.). Progressives have condemned Neal for his efforts in getting Trump’s tax returns, arguing that he hasn’t been forceful enough and that he should have requested them sooner.

Despite what progressives might say, Pelosi outwardly defended Neal, saying he’s “been completely strong and tough-minded on this.”

Pelosi’s assertions suggest that Democrats might not need the help of courts to finally get access to Trump’s tax records, a controversial topic that’s been debated among lawyers in the House in court. Lawyers have claimed that they need to review Trump’s tax information to see if the IRS is fairly taxing the president, not because they want to publicize their findings.

The House Speaker not only praised Neal for his involvement in getting Trump’s tax records, but also for his efforts in House legislation.

“I couldn’t be prouder than to speak in terms of the things that he has specifically done that I have seen on a day-to-day basis to get things done," she said.

“It would be a tremendous loss to that district to lose the chairman of the Ways and Means Committee,” Pelosi added. “And may I say as an aside if you promise not to tell anybody, every time I turn around with any bill that we’re doing, there’s some project of national significance in his district that seems to have made the cut. He’s proud of his district, he’s proud of its ingenuity and he makes sure that it is recognized in legislation in the Congress.”