Susan Rice Addresses her Trump-Supporting Son and Candidacy for VP 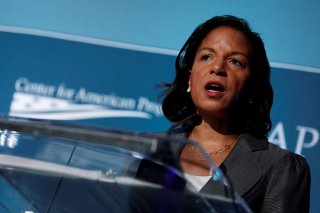 Former ambassador to the United Nations and candidate on presumptive Democratic nominee Joe Biden’s vice presidential shortlist—Susan Rice—addresses her “robust disagreements” with Trump-supporting son but adds “I love him dearly.”

“I have a twenty-three-year-old son whom I love dearly, whose politics are very, very different from my own and from the rest of our family,” Rice told NPR. “My son and I will have some robust disagreements over some matters of policy, not all. And yet, at the end of the day, you know, I love him dearly and he loves me.”

Rice’s son, John David Rice-Cameron, is known to be a vocal conservative at Stanford University and used to head the Stanford College Republicans. He has hosted events like “Make Stanford Great Again.”

“We agree, for example, on the importance of the United States playing a responsible, principled leadership role in the world,” Rice said, referring to her son. “We agree on the importance of having strong alliances. We agree we have to be clear-eyed and strong in dealing with adversaries like Russia and the threat that China may pose. We disagree on things like choice. I’m pro-choice. He’s pro-life. That’s the kind of difference that we ought to be able to respect.”

Despite being so politically polarized, the two echo that they carry a strong bond and respect each other’s beliefs.

“My mother and I have a great relationship, and my mother believes strongly in the free and respectful exchange of ideas,” Rice-Cameron told Fox News in 2018. “We disagree on most of the standard Republican-Democrat disagreements. However, we agree that America is the greatest nation the world has ever seen, and thus, we believe that America has an important role to play as a force for liberty and justice on the world stage.”

Rice served on the National Security Council during the Clinton administration. She later acted as the ambassador to the United Nations and then she was national security adviser under Obama’s administration, working in the West Wing with Biden during his time as vice president.

Rice also told NPR that she’s “honored and humbled” to be considered on his shortlist for vice president and added, “If there’s an opportunity to serve again, I'm certainly eager to do so, but not because it's something that I want for myself.”

“One of the critical reasons why we are in such a difficult spot, whether with respect to the pandemic or economy, national cohesion, racial justice issues is because we are now burdened with leadership in the White House that thrives on dividing us and pitting Americans against each other,” she said. “We absolutely have to move past that to a point of a recognition that we are all in this boat together, we sink or swim together.”

Although she has nearly two decades of experience in politics, she’s never run for office or had to compete in an election.

If selected as Biden’s running mate, President Donald Trump and GOP leaders would likely make remarks about Benghazi. In 2012—during her term as ambassador—four Americans were killed in a terrorist attack on a U.S. mission in Libya. After the brutal attack, Rice addressed it on national TV and claimed it was a spontaneous act of violence in response to a video. Later, it was revealed that her statement was incorrect.

Rice added that her competitors for the vice-presidential pick “are very strong” and all have “relative strengths and weaknesses.”