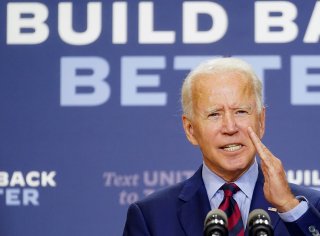 President Donald Trump’s campaign, the Republican National Committee and their joint fundraising committees raised $210 million last month, according to a report from Wednesday, marking it their biggest month in fundraising to date. The figure, however, is still $154.5 million short of what Democratic presidential nominee Joe Biden raked in during the same period.

Biden’s campaign, the Democratic National Committee and their joint fundraising committees announced last week that they rallied $364.5 million, a smashing total that topped the one-month haul for any presidential candidate. The August fundraising total for the Democrats are likely due to the highly anticipated announcement of Sen. Kamala Harris (D-Calif.) as Biden’s running mate for the upcoming election.

Although Biden out-raised Trump during August, the president, the Republican party’s committee and its joint fundraising committees raised roughly $6 million more during the Republican National Convention than the Democratic National Convention. Trump raked in about $76 million during the four-day coronavirus revised convention, while Biden’s campaign received $70 million.

“Both campaigns are raising massive amounts of money, but have very different priorities about how to spend it. In addition to advertising, President Trump’s campaign has invested heavily in a muscular field operation and ground game that will turn out our voters, while the Biden campaign is waging almost exclusively an air war,” Trump’s campaign manager Bill Stepien said in a statement to Fox News. “We like our strategy better.”

Stepien added that the Trump campaign “will have all the resources we need to spread the message of President Trump’s incredible record of achievement, on the ground and on the air, and define Joe Biden as a tool of the radical left.”

But, as the upcoming election is just two months away, Trump confirmed Tuesday that he’s willing to invest in his own presidential bid if necessary.

“If I have to, I would,” Trump said. “If we needed any more, I’d put it up personally, like I did in the primaries last time.” He added, “Whatever it takes. We have to win.”

Trump’s remarks, as well as other news reports, promoted uncertainty for the campaign’s financial durability, but Stepien diluted the speculation, emphasizing that he is “comfortable and confident” in the campaign’s fundraising ability.

“We are now carefully managing the budget,” he told reporters Tuesday.

Former Democratic presidential nominee Hillary Clinton actually outraised the current president in 2016, as she rallied $1.2 billion compared to his $646 million, according to Fox News.