What If the Democrats Had Nominated Bernie Sanders? 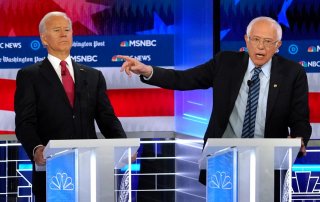 If Joe Biden is the next president of the United States, Democrats will owe a debt of gratitude to their primary electorate, especially in South Carolina.

That’s where Democrats began to collectively pull back from nominating a septuagenarian socialist for president, choosing a more conventional Beltway septuagenarian instead. If the party had continued to follow Bernie Sanders into the abyss, it would have been much easier for President Donald Trump to frame this election as a binary choice between two competing visions—one of them radical—rather than a referendum on his own administration.

This was always the conventional wisdom. The Democratic establishment came of age either losing to Ronald Reagan in the 1980s or winning with Bill Clinton in the 1990s, so they instinctively feared a Bernie Sanders nomination. Never Trumpers could not bring themselves to publicly support an overt socialist, so they begged Democrats not to run one in the general election. Republicans licked their chops at the prospect of running against the Vermont senator the president dubbed “Crazy Bernie.”

But it took coronavirus to make the conventional wisdom fully true. For as many risks as a Sanders nomination entailed, running yet another aging establishment Democrat who generated no enthusiasm from the base and whose best days as a campaigner were long behind them was no safe bet. The playbook that Trump used against Hillary Clinton applied with greater ease to Biden, even if the former vice president was much better liked.

If the Democrats were going to beat an incumbent running on peace (or at least as close as we get to peace in an era of forever wars) and prosperity, someone who could out-populist Trump in their critique of the system might have been the better bet. Sanders could turn Trump into a cookie-cutter Republican — that is, the kind that lost Pennsylvania, Michigan and Wisconsin for going on thirty years — while rallying progressives and cutting into the president’s white working-class margins simultaneously. Yes, even under this scenario the possibility of a down-ballot blowout for Democrats was higher. But as the president would say, “What the hell do you have to lose?”

The pandemic changed all this. Gone went the economic boom that was always Trump’s strongest case for reelection (most polls show him retaining at least a slim advantage on the economy even now). In its place was a Democratic Party newly desperate to do whatever it took to win. The party’s centrists always felt this way, of course. But the coronavirus convinced progressives to get with the program.

From that point on, everything that happened over the course of the summer seemed to strengthen the case for normalcy, however loosely defined. After a March rally around his presidential leadership, Trump’s coronavirus briefings degenerated into the absurd. The killing of George Floyd in Minneapolis police custody and ensuing racial justice protests had Americans seeking unity. Trump is constitutionally incapable of meeting that need.

None of this is to say that Biden is a candidate without flaws. A gaffe-prone windbag at even the height of his powers, there are reasons to doubt he is fully up to the rigors of the presidency. He certainly seems ill equipped to contain the leftward lurch of the Democratic Party that even a plurality of its own voters rejected. “I think he has been wrong on nearly every major foreign policy and national security issue over the past four decades,” former Defense Secretary Robert Gates, who is no ideologue, has said of Biden.

But the campaign has unfolded in such a way as to make Biden at best a minor participant. Trump’s flaws, not Biden’s, have taken center stage and Republicans have been unable to do much to alter this dynamic. The debates could potentially be a turning point, of course, but Biden may only have to beat the expectations game, in which case a minimally competent showing will be a resounding victory.

External events still give Trump a chance. Progress on a vaccine is possible, despite the Democrats’ best efforts to turn one into hydroxychloride redux. Time is running out for an economic recovery to solidify, but it is still possible that reopening will look better by the end of October than it did to many in July. The racial justice protests have periodically erupted into lawlessness and violence, a risk Democrats have belatedly sought to address.

Yet barring polling malpractice worse than 2016’s, Biden remains the favorite less than two months out, thanks in part to the radicals in his party suddenly becoming risk-averse.