Why America First Is Here To Stay, Even if Donald Trump Is Defeated 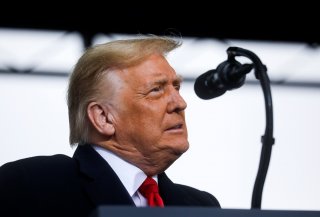 The extent to which White nationalist identity politics has informed Donald Trump’s America First nationalism can be debated; while it has played some part its role has been greatly exaggerated, as the slowly increasing Republican share of the black and Hispanic vote in 2016 and 2018 and shrinking share of the White vote suggests. What has been less discussed is the role of a different kind of identity politics that animates many of the affluent and educated Americans and Europeans who despise Trump: Atlanticist identity politics.

When Walter Lippmann coined the term “the Atlantic community” in 1917, the term must have sounded odd to most Americans. From the Founding era until World War II, the map of world politics that most Americans had in their heads separated the New World from the Old World by imaginary lines drawn through the middle of the Atlantic and Pacific Oceans. The Old World was the zone of war and tyranny; the New World, a quarantined zone of peace and liberty, at least for White settlers and White immigrants.

Anglophiles in the Southern gentry and the Northeastern patriciate often held the rival view that Anglo-Americans were merely a branch of the “Anglo-Saxon race.” In this view, Americans and their overseas cousins would have been part of a great English-speaking commonwealth along with Canada, Australia and New Zealand but for the errors of George III and his ministers. Sometimes Germans and Scandinavians were also lumped in with the Britons and their overseas settlers to form a Teutonic family of nations for whom the North Atlantic was narrower than the Rio Grande and the Rhine.

Around 1900 these two conceptions of American identity were joined by an idealistic strain of supra-national idealism. Pamphlets published before World War I promoted schemes for world courts, world leagues and world parliaments. This “Wilsonian” internationalism triumphed with the creation of the League of Nations and later the United Nations.

Disenchantment with these global organizations led some idealists to propose smaller federations of democracies. In 1939 Clarence Streit of the New York Times published Union Now: A Proposal for an Atlantic Federal Union of the Free. He also founded an organization, the Inter-Democracy Federal Unionists, which went through various name changes to the present day.

The membership of the Atlantic community and democratic nations largely overlapped with membership of NATO during the Cold War. The multiplication of democratic and semi-democratic regimes following 1989, however, has created a gap between the idea of a “league of democracies,” popular among some foreign policy elites in the George W. Bush years, and the more exclusive idea of an Atlantic community based on shared heritage and culture, if not race.

A similar tension between placeless democratic idealism and regional cultural identity haunts the main rival of the Atlanticist project for the affections of trans-Atlantic liberals, the project of Eurofederalism. Atlanticism has always been more popular in Washington, DC than Brussels. For most elite Europeans, the goal of Eurofederalism has been to create a superstate that is independent of the United States and able to hold its own against future competitors like China and India. Europeans may welcome U.S. military protection under the umbrella of the NATO alliance. But the only proposals by Europeans to create a sort of Atlantofederalism, complete with trans-Atlantic governing structures, have been limited to former French prime minister Edouard Balladur, in For A Union of the West (2009), and Empire 2.0: A Modest Proposal for a United States of the West by Xavier de C***. The latter was a satirical post-9/11 novel by the French intellectual Regis Debray.

American Atlanticists include a substantial number of individuals who might be described as fellow-travelers of the EU. In the way that many Western Marxists believed that the Soviet Union, for all of its flaws, was the model of a new, emerging civilization, many Europhile Americans have viewed an idealized European Union as a sort of ideological second homeland and the model for the world’s future. Like the Atlantic Unionists of the mid-twentieth century who had given up on the League of Nations in the short run, they see the European Union as a kind of pilot project for a future global order, in which national sovereignty will be eroded by free flows of labor, goods, and capital across borders, while the vulnerable will be protected by a generous welfare state and those who disagree with liberal social norms will be prosecuted for “wrongthink” and hate crimes.

The Brexit vote came as no surprise to those who had been following the populist backlash against Eurofederalism in Britain and elsewhere. But many American Europhiles had paid no attention to that political undercurrent, even as they vacationed or went to conferences in Europe, where they associated only with like-minded friends and colleagues.

I was at a conference in the United States on the morning after the Brexit vote. At breakfast I found that some of my fellow panelists, all Americans, were nearly in tears, so upset were they by the result. They were suffering from acute shock and grief. When I asked them why they cared, inasmuch as we Americans would not be significantly affected, they could not provide an explanation.

The election of Trump provoked the same kind of horror and outrage from the same sort of people. While Remainers in the UK sought to use all means, fair and foul, to overturn the Brexit vote, Democrats and Never-Trump Republicans promulgated conspiracy theories and supported impeachment in an attempt to annul the 2016 election. The disproportion between the hysteria of the U.S. establishment and the actual actions of Trump, who has governed as a fairly typical Republican president except for an unusually dovish foreign policy and an obnoxious personal style, is so enormous that it can only be explained by psychological factors.

All of this has convinced me that Atlanticism is now a kind of quasi-religious or tribal identity. I had a glimpse of this in the Bush years, when a Yale Law Professor told me that he considered himself to be, not an American patriot, but a “citizen of the mid-Atlantic.” At the time, his remark brought to mind one of Tom Wolfe’s lesser-known comic studies: The Mid-Atlantic Man and Other Breeds in England and America (1969). Wolfe was mocking celebrity journalists like Alastair Cooke who shuttled between the United States and the UK. In Bonfire of the Vanities the type was symbolized by the British ex-pat journalist Peter Fallow. Since the Cold War, however, the eastern borders of the imaginary Atlanticist homeland have expanded along with NATO to the borders of Ukraine and the Baltic states.

The role of the idealized European Union as the laboratory of the future in the imaginations of America’s Europhile Atlanticists explains their obsession with Vladimir Putin. By any rational criterion, China under Xi Jinping is a far greater threat to the U.S. position in the world than post-Soviet Rump Russia. Like France, Russia is a regional power with nuclear weapons, a seat on the UN Security Council, a tradition of sometimes brutal Realpolitik in its sphere of influence, and memories of greater global importance.

What explains the Putin hysteria on the center-left? It seems that demonizing Putin allows Atlanticists and Eurofederalists to blame populist discontent in their own nations, not on the policy failures of their ruling establishments, but on subversion by an evil outside power. The European Union is Eden and Putin is the serpent plotting to bring about the Fall. The fact that Putin, sincerely or not, expresses sympathy for European social conservatives and national populists allows the Europhiles to treat the latter as Russian pawns, just as the anticommunist right in the Cold War treated leaders of the civil rights and labor movements as pawns of the Kremlin.

In the same way that dissent in Stalin’s Soviet Union could be blamed on Trotskyite “wreckers” backed by foreign capitalists, so the votes for Brexit and Trump are attributed by many otherwise seemingly sane Western liberals and liberal conservatives to Russian propaganda and electoral interference. The vote for Remain in Britain would have won, but for Putin’s wily manipulation of British politics! Without Russian propaganda ads on Facebook, Hillary Clinton would have been president for the last four years! If Trump, in spite of his unpopularity, is re-elected, then much of the trans-Atlantic establishment will attribute the result to the machinations of the all-powerful, diabolical Vladimir Putin. One reason to hope for a Biden victory (there are not many) is the possibility that it will bring an end to the hysterical neo-McCarthyism that has gripped America’s foreign policy, academic and media establishments for the past four years.