Why Doesn’t Joe Biden Have a Large Lead Over Donald Trump? 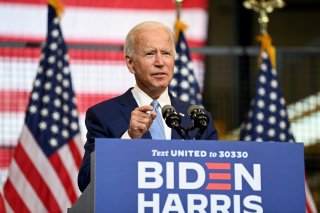 During the last presidential election campaign, when it became increasingly obvious to many that Donald Trump was a very troubling candidate, Hillary Clinton wondered aloud: “Why am I not ahead by fifty percent?” After all, how can any reasonable person vote for this guy? The same question stands now, only in much sharper relief. People now have seen, for years, the damage Trump has done to all the country holds dear. He has wrecked democratic institutions, the health of millions of Americans, the economy, and the nation’s sense of self-respect. And yet, Biden is only leading by ten percentage points, a margin that could shrink within the next few months.  How can more than one out of four Americans, polls show, approve of Trump’s performance as a president? How is one to explain that millions of people believe in the counterfactual, “alternative” facts he spouts daily and the conspiracy theories he proffers—and that they plan to vote for him to spend four more years in the White House?

Ezra Klein offers an answer in a new book, Why We’re Polarized. He presents data showing that American people used to have multiple and conflicting identities, which made them open to a variety of affiliations and appeals; they could see themselves as middle class and liberal, Latino and conservative, and so on. In recent years, he has found that Americans have increasingly developed one defining identity, seeing themselves mainly through one lens, as members of one tribe—their political party. And, the Republican Party has become largely a party of Whites, while the Democratic Party includes all the others. Hence, the vote for Trump is a vote of Whites who see themselves, more and more, as a persecuted minority that seeks protection from a threatening coalition of people of color. (A warning: when one summarizes a rich book in a short paragraph, much is left out.)

Michael Lind offers a different answer in his new book, The New Class War. He sees Trump supporters in the same light as similar populist voters in other challenged democracies, from Poland to Italy, Hungary to Turkey. In all these cases, the masses rebel against a managerial, elitist class, a class composed of people with college educations and a globalist viewpoint, detached from the people, with the power to implement policies that affect everyone but that only they believe in. He finds that the elites are supported by big business and that they undermine labor unions. Sending jobs overseas and enacting open-door immigration policies, actions favored by the lording class,  which undermine the wages of the working class. The lording class is small, but it benefits from the fact that the working class is divided along ethnic and ideological lines. (A warning: when one summarizes a rich book in a short paragraph, much is left out.)

I fully understand the urge to find one major cause for that which ails us. However, as I see it, the persistent, odd, puzzling, lingering support for Trump is driven by the factors both Klein and Lind identify—and several others. It is what social scientists call “overdetermined.” There is strong data to show that indeed Americans have become increasingly tribalized along political lines, and hence once one is affiliated with one tribe, the other tribe becomes evil incarnate, and one’s own can do no wrong. And the evidence shows that over the last decades, the American working class has suffered from little growth in real wages, as well as losses of benefits and job security.

At the same time, one should not ignore the religious factor. Most evangelical Americans have made a Faustian deal, in which they decided to vote for a man who violates the values of family and charity and virtue they hold dear, in order to ensure that they get a president who will put justices on the Supreme Court (and judges on lower courts) who support their values. Justices who they hope will overturn Roe v. Wade and protect what they consider to be religious freedoms.

There is no easy way to find out the exact number, however, it seems that a considerable number of Americans in the higher income tax brackets, those with large estates, seek a reelection of Trump in strictly pocketbook terms. Biden may cost them and their children and grandchildren plenty. Many businesses, big and small, hate government regulations that cut into their profits, saddle them with paperwork, and limit who they can hire and fire. Trump is their free-market insurance.

The media also carry part of the blame. Fox News and QAnon formed perceptual bubbles in which people’s prejudices are reinforced and the counterfactual worlds are undergirded. Those who differ have their own bubbles. There are no longer venues in which facts are shared on a broad, national basis or dialogues that cut across the dividing lines. Social media has made it possible for a demagogue to reach scores of millions of people, without having to go through and be vetted by local leaders, be it clergy or union leaders.

The hard Left also belongs in the lineup of Trump-abetting culprits. Those who set fire to courts and police stations are not helping Biden to become the next president of the US. Sometimes peaceful demonstrations get out of hand. However, one cannot ignore when violence and destruction of property are carried out in cold blood, so to speak. The slogan “our future was looted; loot back,” used by a group of looters in Chicago who hired vans before they went on their rampage, is a gift to the beleaguered Trump campaign.

We hear a great deal that the United States needs systemic changes. I am not sure these changes can be brought about in the near future, as the next president will come into office during a perfect storm, in which he will face a raging pandemic and a shattered economy. Surely little can be done between now and November. Trump once stated that his base would support him even if he went on 5th Avenue and shot someone. Since then he is partially responsible for the loss of more than 175 000 American lives, and his base remains basically loyal. It is hence very unlikely that the Democrats’ dream, that Biden will be able to bring back the White working-class into the party’s fold, will be realized.

Given that the nation is basically evenly divided—a hard truth to face—the election will be won at the margins (the estimated proportion of swing voters in the United States varies from 10 percent to 13 percent). It will depend on those evangelicals whose consciences will no longer allow them to vote for Trump. It will depend on those White working-class Americans who see that Trump did not improve their fate and who are ready to reconsider their prejudices in the wake of the Black Lives Matter movement. It will depend on affluent Americans who are patriotic enough to vote for someone who will cost them but will save many lives. In short, it will depend on the reawakening of the multiple identities a fair number of voters and their willingness to act in defiance of the tribalism that Klein describes, and it will depend on some working class to ignore the ethnic and ideological lines that splintering their vote, in line with the class warfare that Lind outlined. Those who find comfort in the headlines that tell them that Biden has a “significant” or a “substantial” lead should recall that in the summer of 1988  Dukakis led Bush by 17 percent. Democrats specialize in snatching defeats out of the jaws of victory.

As far as the candidate the Democrats chose, I agree with Frank Bruni who writes, “Biden doesn’t have everything I wish for in a president, but he has goodness, and for a country that needs to reclaim its decency, re-establish its dignity and right its course, that’s not a bad place to start.”

Above all, the election results will depend on millions of Americans of all backgrounds being willing to make the extra effort that voting will require this year—facing the pandemic, unemployment, and the hurdles put in their way—to not just vote but to bring others to the mailbox or ballot box.