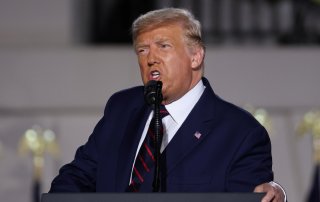 Civil unrest has swarmed America’s major cities — protesters burst stores into flames, gunshots wounded resistors, looting erupted in the streets — and President Donald Trump has made tackling this chaos a centerpiece on his platform going into the 2020 presidential election.

At the Republican National Convention that ended last week, speakers focused on restoring law and order, noting that protesters “want to abolish the suburbs all together” and that “we’ll never be free to build a brighter future for ourselves,” if Democrats capture the White House in November. Trump, along with the help from his convention speakers, are attempting to appeal to the suburban voter — a method taken from former President Richard Nixon’s playbook — who lives in the outskirts of the cities boiled in violence and rioting and are fed up with the unrest.

In 1968 — a pivotal year in politics — acts of violence exploded in more than 100 cities, similar to that of today, where protesters looted, with some actively shooting civilians in response to the assassination of Martin Luther King Jr., the leader of the civil rights movement.

The civil unrest was long-lasting, prompting residents in the suburbs to tire of the waves of violence that tarnished major cities. At this time, suburbia was composed primarily of middle and upper class, white residents, sadly isolating Black people from their neighborhoods.

That same year was an election year. Since violence and crime were America’s main priorities, Nixon made this front-and-center going into the presidential race. During his campaign and even at the convention, Nixon advocated to restore law and order and provide more funding to the police.

“I pledge to you, the wave of crime is not going to be the wave of the future in America,” Nixon said.

He emphasized that “every American is to be freed from domestic violence” and “we shall have order.” Nixon coined the language of fear, permitting suburbia to be upset by the movement and scared for what’s next in terms of protests. He referred to these types of voters as “the non-shouters, the non-demonstrators,” those that were a part of the silent majority that could determine the results of the election.

Nixon’s theme and tactics — appealing to Purple America, or swing voters in suburbia — carried into later presidential elections, including both 2016 and 2020 for Trump.

“When I take the oath of office next year, I will restore law and order to our country,” Trump said, prior to winning the 2016 election.

“I think what Nixon understood is that when the world is falling apart, people want a strong leader whose highest priority is protecting America first. The ‘60s were bad — really bad — and it’s really bad now. Americans feel like it’s chaos again,” Trump said.

Trump has consistently made decreasing crime and sustaining law and order the main parts of his platform, especially for this year’s election. As protests over crime and policing persist in the country, Trump has tried to persuade suburban voters to back his campaign in November, stressing he will solve these prominent issues.

Can It Work for Trump?:

Although the suburban strategy proved to be successful for Nixon, it might not work for Trump come November.

Unlike in 1968, suburbia is racially diverse. They’re no longer middle and upper class, white residents. Instead, they’ve embraced different classes and races, bringing fresh political ideals into their communities.

Some polls also indicate that the suburbs actually advocate for the Black Lives Matter movement. Perhaps they don’t necessarily support the violence associated with it, but protesters’ actions aren’t the suburban voters’ main concern right now. According to Gallup’s “Most Important Problem” survey, coronavirus is the main concern for participants. As of August, nearly 35 percent plurality believed “coronavirus/diseases” was the most important problem in the country, 22 percent thought “the government/poor leadership,” and 10 percent believed “race relations/racism” was the dominating factor.

Taming the violent outbreaks is definitely a worry for voters, but it is not the primary issue for voters heading into November.

Trump can try to convince voters that he’ll finally restore law and order, but that tactic might end up being flawed, as the suburbs have other fears to worry about, rather than protests and looters.