Would Donald Trump Run in 2024 If He Loses? Grover Cleveland Did. 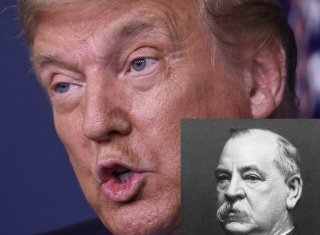 Jimmy Carter may only have served one troubled term as president, but he has served the four decades since as the most respected of elder statesmen. George H.W. Bush quietly retired in 1993, passing his family's political ambitions on to George and Jeb. It is said that Gerald Ford seriously considered returning as vice president for a second time around in 1980, before committing to the clubhouse and the boardroom.  But all of them could have made another tilt at the presidency if they had wanted to. Technically, the 95-year-old Carter still can.

And, should he lose the election this November, so too could Donald Trump.

America's political elite is desperate to avoid a Trump win, taking cheer from opinion polls that give his Democratic challenger Joe Biden a decisive lead. Whatever they may think of Biden, his fellow Democrats yearn for a return to normalcy -- and a return to power.  Many Republicans are also quietly (or not so quietly) ready to put the Trump Era behind them. Diehard anti-Trumpers, having given up their hopes for a stock market crash to bring down the president, sometimes actually seem to be rooting for the coronavirus. Anything to stop Trump.

But even if Trump does go down in November, don't expect him to "go gently into that good night."  No, Donald Trump is not going to stage a coup, as contributors to the Guardian, the Atlantic, and even Foreign Policy have suggested with straight (if somewhat tortured) faces. That's plain ridiculous. If Trump loses, he will not squat in the White House, surrounded by a Praetorian Guard of MAGA-hat-wearing gun enthusiasts. He will, however, retreat to Trump Tower, rename it Barad-dûr, and spend the next four years plotting his revenge.

If there's one thing we can all agree on in a divided America, it's that if Trump loses the 2020 election, he will claim that it was stolen from him: by the liberal elite, by the mainstream media, by ballot fraud, by Democratic judges, by Republican Never Trumpers, by the coronavirus, by whatever. He will not gracefully accept defeat and grudgingly support a Biden presidency. He will demand a rematch, and in 2024, he will get it.

It wouldn't be the first time that a one-term president demanded a rematch four years later. In 1884, the Democrat Grover Cleveland squeaked out a victory over the Republican James G. Blaine by winning the Republican redoubt of Indiana and the (then) swing state of New York. Four years later, the Republicans nominated the former Indiana Senator Benjamin Harrison for president, paired with a former Representative from New York. They lost the popular vote, but won both states, booting Cleveland from the White House.

Grover Cleveland's first lady, Frances Folsom Cleveland, is supposed to have exhorted the White House staff "to take good care of all the furniture and ornaments in the house, for I want to find everything just as it is now when we come back again four years from today." And return she did. In 1892, her husband Grover brushed aside appeals to give someone else a chance, ignored policy differences that led rebel Democrats to from a breakaway Populist Party, and bulldozed his way back into the White House. Cleveland remains the only person to have served two non-consecutive terms as president, going down in history as the 22nd and 24th president of the United States.

Cleveland is now mainly remembered as the answer to a political trivia question: why is Donald Trump the 45th president, but only the 44th man to have held the office? But he set a precedent that it would be wise to keep in mind. Reelect Donald Trump, and the Trump Era in American politics will end promptly on January 20, 2025. Opt instead for Joe Biden, and it might last until the end of Trump's (non-continuous) second term in 2029. Either way, Trump is not going to just go away for the next four years. Joe Biden may win the presidency, but even if he does, he will still be governing in the shadow of Donald Trump.