Would Joe Biden Really Wear a Secret Earpiece During Tonight's Debate? We Say No. 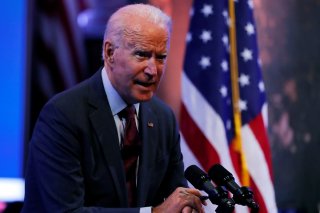 Ahead of the first general election presidential debate Tuesday night, an exceptionally silly news cycle took place, involving that old standby-the idea that one presidential candidate had used, or planned to use, an earpiece during the debate, in order to illegally get help from advisors as to how to answer the questions.

Fox News reported Tuesday morning that President Trump had asked for a new ground rule ahead of the debate: That the candidates “allow a third party to inspect the ears of each debater for electronic devices or transmitters.”  Fox was also told that the campaign of former Vice President Joe Biden had agreed “several days ago” to the pre-debate inspection but had then had “abruptly reversed themselves,” Trump campaign spokesman Tim Murtaugh told the outlet.

A Biden campaign spokesperson, Kate Bedingfield, told Fox that the request was “absurd,” and also denied an assertion by Murtaugh that the campaign had asked for a pair of thirty-minute breaks during the debate.

"His staff seems concerned that he may not do well tonight and they’re already laying the groundwork for how they’re going to lie about why," Bedingfield told Fox. "It is completely absurd. Of course, he’s not wearing an earpiece and we never asked for breaks."

Traditionally, presidential campaigns, along with the Commission on Presidential Debates, reach agreements weeks or months in advance about the format and ground rules of debates. The issue of breaks, in particular, would probably have been agreed upon well in advance with the TV networks airing the debate.

Even so, the baseless assertion that Biden would be using an earpiece during a debate, in order to cheat, is a very familiar one. In 2016, per Snopes, a conspiracy theory made the rounds online alleging that Democratic candidate Hillary Clinton had used an earpiece, or perhaps a “coughing prevention machine,” during her first debate with Trump.  There was a similar allegation, also debunked by Snopes, that President Barack Obama had used an earpiece in a 2012 debate with Mitt Romney.

And it’s not only Democrats who are accused of such things. During a 2004 debate between President George W. Bush and Democratic nominee John Kerry, there was speculation about a mysterious bulge in the back of Bush’s jacket, per The BBC. And during a 2008 Republican primary debate, a voice could be heard suggesting answers to candidate Romney, although The Huffington Post concluded that the microphone had probably merely captured an audience member whispering.

In most of those cases, including those of Clinton and Obama, the bulge that supposedly contained an earpiece was in fact related to a microphone pack. Bush’s campaign, at the time, claimed that the “bulge” was merely a wrinkle in the president’s jacket.

At any rate, it’s very difficult to imagine that a presidential candidate could covertly wear an earpiece during a one-on-one presidential debate, and receive answers throughout, without their opponent or anyone else noticing. Especially since such things have been noticed during so many debates before, despite not really happening.