$5 Trillion Meltdown: What If China Shuts Down the South China Sea? 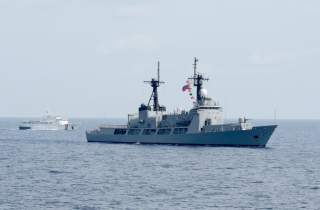 China has fired off a music video, editorials and plenty of other propaganda, along with a few volleys from PLA Navy ships, in response to the international court ruling on the South China Sea, which it denounced as “null and void.” But after threatening to set up an air defense identification zone, what might the economic impact be if Beijing went one step further and closed off the entire area inside its so-called “nine-dash line”?

Based on a 1947 map by the then Kuomintang government, the vaguely defined nine-dash line encompasses around 90 percent of the South China Sea. It spans an area the size of Mexico extending more than one thousand kilometers from China, and which encompasses territory claimed by Malaysia, the Philippines, Taiwan and Vietnam.

While China is the major beneficiary of freedom of movement in the region, a number of other countries rely upon shipping routes through the disputed area, namely Japan, South Korea and Australia.

An estimated $5 trillion worth of goods are transported through South China Sea shipping lanes each year, including more than half the world’s annual merchant fleet tonnage and a third of all maritime traffic worldwide.

Oil transported through the Malacca Strait from the Indian Ocean, en route to East Asia via the South China Sea, is triple the amount that passes through the Suez Canal and fifteen times the volume that transits the Panama Canal.

According to Robert D. Kaplan, some two-thirds of South Korea’s energy supplies, nearly 60 percent of Japan’s and Taiwan’s, and 80 percent of China’s crude oil imports flow through the South China Sea.

The majority of Australian cargo travelling through the South China Sea is destined for China; however, were China to obstruct shipping routes in the South China Sea between Australia and its other trading partners, it could force a costly reroute of some $20 billion worth of cargo per annum.

Another reason for China’s interest in the South China Sea is its massive potential for oil and gas—what Kaplan has described as a “second Persian Gulf.”

Should these estimates prove accurate—and there is some debate over the actual recoverable reserves—then the South China Sea could contain more oil than anywhere else on Earth, apart from Saudi Arabia.

The caveat is that much of these reserves are located in deepwater fields, which are more technologically difficult and extremely costly to extract. For China’s energy needs, cheaper alternatives are readily available, particularly given low current oil prices. But for the Philippines and Vietnam, losing access to the South China Sea’s potential oil and gas wealth would be far more economically significant.

While China has sought to shut out other nations’ fishing vessels from the South China Sea since 2012, a total closure of the region would be extremely damaging to Southeast Asia. Commercial fishing accounts for an estimated 3 percent of Indonesia’s GDP and almost 2 percent in Malaysia, the Philippines and Thailand.

China has a powerful bargaining chip in its position as the largest trading partner for nearly all Southeast Asian economies. According to ASEAN data, in 2014, China accounted for more than one of every five dollars of imports from Southeast Asia, with the European Union accounting for one of every eight, and Japan one in ten.

While analysts such as Malcolm Cook suggest that China “doesn’t have the clout” to exert hegemony in the region apart from the states of Cambodia, Laos and Myanmar, shutting the South China Sea would damage Southeast Asia as well as curtailing the flow of goods to larger economies, such as Japan, South Korea and Australia.

Yet should the crisis escalate, the most damaging economic fallout would likely be a breakdown of trade in one of the world’s last remaining regions of economic dynamism. Even for China, the world’s second-biggest economy, the cost of such a shutdown would vastly surpass the benefits from keeping the South China Sea all to itself.