America Must Manage North Korea, Not Destroy It 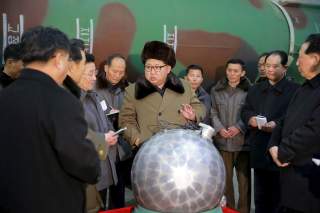 As this summer’s North Korea war crisis winds down, the only serious option for dealing with a North Korea capable of attacking the United States with nuclear missiles is reemerging: adaptation. As Richard Haass, the president of the Council on Foreign Relations, put it: “Not every problem can be solved. Some can only be managed . . . It remains to be seen what can be done vis-à-vis North Korea. Managing such challenges may not be satisfying, but often it is the most that can be hoped for.” This is almost certainly correct.

Numerous treatments have established that the military options against North Korea are terrible. Steve Bannon openly admitted this on his way out of the White House: “There’s no military solution [to North Korea’s nuclear threats], forget it. Until somebody solves the part of the equation that shows me that ten million people in Seoul don’t die in the first thirty minutes from conventional weapons, I don’t know what you’re talking about, there’s no military solution here, they got us.” That ten million number is exaggerated, but the basic problem Bannon taps—Seoul’s tremendous vulnerability, and the strict limitation that puts on kinetic choices—is well established. It is almost certainly the reason the United States and South Korea have yet to strike North Korea despite decades of retaliation-worthy provocations. Decentralizing South Korea is a long overdue idea to loosen this constraint, but in the short- and medium-term, military options are, in fact, “off the table,” no matter what Donald Trump says.

Talks would be an ideal choice—if anyone really thought at this point that North Korea would negotiate in good faith or could be trusted to follow through. Sure, we should always try. We have nothing to lose if we enter negotiations with the appropriate doubts. But if any observers are harboring notions of a big break-through or a grand bargain—such as the recent Sino-Russian “dual freeze” proposal to halt North Korean nuclear development in exchange for a U.S.-South Korean military exercise halt—they are not paying attention. North Korea’s record of flimflamming agreements is so entrenched, that the only way to restart negotiations would be small, undramatic steps, such as those proposed by former South Korean president Park Geun-hye and current South Korean president Moon Jae-in. And naturally Pyongyang as summarily dismissed those.

There is simply not enough strategic trust—not by a long shot actually—for a big-package deal, and indeed, the United States and South Korea rejected the dual freeze proposal almost immediately. Lest one think this stems from unremitting U.S. hostility, consider the Iran nuclear deal, which even the Trump administration is grudgingly cleaving to. The United States will talk to North Korea—indeed the dual freeze might actually be worth considering if we thought Pyongyang would hold to it. The problem is that no one trusts the North to take talks seriously anymore, not even the Chinese.

Hence we are back to where we started: defense, deterrence, alliances, missile defense, sanctions, cajoling China over sanction enforcement, pruning North Korea’s diplomatic relationships, chasing Northern money out of banks in Asia, hauling Pyongyang before the UN Security Council to keep up the global pressure, and all the rest. One must not call this “strategic patience.” Perhaps we can call it “management,” per Haass, or “maximum pressure,” per the Trump administration. But in the end, it is more or less strategic patience yet again. And in fact, strategic patience was just an Obama administration pseudo-neologism for what we have been doing with North Korea for decades. All these actions are depressingly familiar, but there are really no good alternatives. War is much too risky, talks a likely charade.

North Korea is maddeningly persistent. From the outside, it always appears on the verge of collapse, especially since the end of the Cold War. In the 1990s, it suffered the kind of serious shocks—the death of its founder (in 1994), the withdrawal of Soviet aid, a massive famine—which brought down fellow communist states in that era. Yet North Korea persisted. It has survived yet another dynastic transition (in 2011) and punishing sanctions isolation while developing a serious nuclear and missile arsenal.

This is not a state on the cusp of implosion, and it would help the practicality of our policy proposals if we could accept that. For example, it should be pretty obvious at this point that North Korea is not going to disarm its nuclear weapons, no matter how much the United States and South Korea insist on it. The concessions Pyongyang would demand for such disarmament—a retrenchment of the United States from the peninsula, or permanent South Korean subsidization of the North, e.g.—would be so large, that Washington and Seoul would never accept a concessions deal. Instead, we need to ask how are going to manage this new, truculent nuclear power.

So muddling along is our future with North Korea, no matter how much we dislike that. The more we focus on small and medium-sized steps rather than ideal (but extremely unlikely) North Korean nuclear disbarment, the more progress we will make. The Iran nuclear deal is instructive here. There too we confronted a (almost) nuclear rogue state. We tried sanctions, deals, sabotage, missile defense, enhancing the defense of regional allies, and so on. Those worked reasonably well in slowing the nuclear march. Next, we clenched a concluding deal, which was surely not ideal. Conservatives worry about the return of resources to Iran, possible future nuclearization, and the regime’s continuance. But we did get a fair amount. North Korea may not come to the table as Iran did, but in the same way that we are managing—rather than solving—the Iran problem, that too should be our template in Korea.