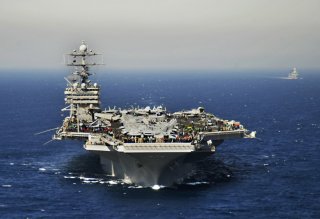 The military services responsible for American seapower (Navy, Marine Corps, Coast Guard) recently released their new maritime strategy, entitled “Forward, Engaged, Ready: A Cooperative Strategy for 21st Century Seapower.”  The reviews thus far have been positive, with most analysts praising the specificity of the document, as compared to its 2007 predecessor, as well as its harder, more combat-oriented edge.  One set of reviewers have yet to be heard from, however, and that is the large and garrulous community of Chinese military analysts.  This analysis attempts to anticipate what that reaction will be.

One of indication of how the Chinese military community will react is its past history.  The 2007 strategy did not name China as a challenge or threat, nor did it particularly focus on Chinese strategies already being discussed in navalist circles for denying U.S. freedom of action.  As the Team Lead for the production of that document, I was privy to high level conversations about the degree to which the document should “name names.”  One discussion in particular occurred late in the development of the strategy, in which the then-Chief of Naval Operations Admiral Mike Mullen reacted to the insistence of another Navy four-star admiral that China should be explicitly identified in that document.  Mullen’s reaction was that he believed they (the Chinese) would “read themselves into the document.”

Within weeks of the October 2007 release of the strategy, Dr. Andrew Erickson of the China Maritime Studies Institute based at the U.S. Naval War College began to survey Chinese open source discussions, and his work largely confirmed Admiral Mullen’s prediction.  The strategy advanced an argument about the defense of the global system and this was clearly understood by Chinese analysts as meaning that the United States would defend the system it had designed and led.  Additionally, they understood that the strategy intended to help the United States retain its global leadership position.  None of these points were particularly appealing to Chinese analysts, even if the message itself was rather nuanced.

The new maritime strategy dispenses with subtlety.  No longer espousing the defense of the global system as its strategic kernel, the new strategy moves down the strategic continuum from its predecessor’s more “grand” aspirations, to strategy more focused on the operational benefits of American seapower, chief among them, the ability to gain and maintain access to enable joint operations.  This focus on access is a direct result of China’s counter-intervention strategy known largely in the United States as “anti-access and area denial” (A2/AD). To a lesser extent, Iran is also pursuing similar capabilities and concepts.  The naval services rightly understand that the United States’ competitive advantage is its ability to project power thousands of miles from its own shores, In order to mitigate that advantage,  China recognizes that it must deny it the free use of the seas.  Unlike its predecessor, this document names names.

The new strategy also underscores another great strength of the U.S. strategic approach in the Indo-Asia Pacific: its network of friends and allies. The document states: “[b]ased on shared strategic interests, the United States seeks to strengthen cooperation with long-standing allies in the Indo-Asia-Pacific region—Australia, Japan, New Zealand, the Philippines, the Republic of Korea, and Thailand—and continues to cultivate partnerships with states such as Bangladesh, Brunei, India, Indonesia, Malaysia, Micronesia, Pakistan, Singapore, and Vietnam.”  Where Washington speaks of strengthening partnerships, the Chinese are sure to see encirclement, and they will not be bashful about saying so.  Some analysts saw the far less China-focused 2007 document as a modern statement of containment; this version is likely to evoke even more hyperbolic responses.

Beijing’s perception of encirclement will be evoked as a justification for both the build-up and modernization of naval forces and the continuing importance of the Chinese counter-intervention strategy.  Additionally, there may be attempts to justify extending the Chinese network of bases and places to locations much closer to the United States than ongoing efforts in West Asia and Africa, including initiatives in South America and the Caribbean.

China’s centrality in this document is, however, also likely to have the perverse effect of stroking the collective ego of analysts with the “Century of Humiliation” chip on their shoulders.  At least some Chinese military analysts and opinion writers are sure to see this new strategy as reinforcing their own growing sense of major power self-esteem.

Finally, though it is unlikely we will see much public discussion along these lines, it should be obvious to the Chinese that the United States does not wish to quietly fade into the night, and that there is plenty of thought and resources being applied to ensuring naval dominance in the Indo-Asia Pacific region for decades to come.  China may have previously been able to quietly “fly under the radar,” but that time is past.  A competition is on, and both sides are now acknowledging it. There is far less room for nuance now.

Bryan McGrath is the Managing Director of The FerryBridge Group LLC, and is the Asssitant Director of the Hudson Institute’s Center for American Seapower.