Are U.S. Special Forces Facing a Syrian 'Black Hawk Down'? 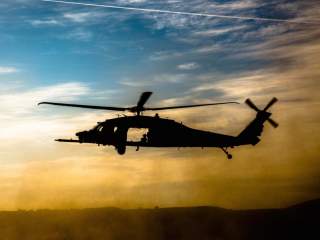 As part of an expanding campaign in the region, American special operations forces have taken the Rmeilan air base in Syria. The base is located in the northeastern part of Syria near the Turkish and Iraqi borders—which is an area dominated by the Kurds.

According to the London-based Syrian Observatory for Human Rights (SOHR)—which is affiliated with the opposition—the U.S. advisors arrived at the Rmelian base several weeks ago. The base’s infrastructure is being expanded so that it can support U.S. military operations in the area. U.S. helicopters are already using the base according to the SOHR. The group expects that fixed-wing aircraft will soon operate from the runways, which are currently being expanded.

U.S. Central Command spokesman U.S. Army Col. Steve Warren would not comment on the matter. “That operation is ongoing. But because of the special nature of these forces, it's very important that we not discuss specifically where they're located,” Warren told reporters Wednesday, according to Military Times.

The United States is likely to use the base for bringing in supplies and weapons for the various opposition groups that are fighting ISIS and the Assad regime. The base could also be used to base strike aircraft—which would increase sortie generation rates. The base might additionally serve as a staging ground for special operations forces—a likely scenario in the short term.

Given that the Pentagon is not commenting on what forces are operating in the area, it’s difficult to say with certainty what kinds of troops are deployed on the ground. What is known, however, is that the U.S. military deployed about fifty special operations troops to Syria in December. Those troops have been in contact with opposition forces and have been coordinating with U.S. air power.

The aforementioned helicopters could be from the U.S. Army’s 160th Special Operations Aviation Regiment—which is an elite unit tasked specifically to support top tier special operations units. The are also a number of U.S. Air Force special operations aviation units flying everything from CV-22 Osprey tilt-rotors to MC-130 transports to AC-130 gunships that might eventually operate from the base.

U.S. special operations forces are theoretically only playing a supporting role in Iraq and Syria—teaching and training local forces. Nonetheless, American special operations forces have been involved directly in combat operations in the region. One prominent example was when an operator from the U.S. Army’s elite Delta Force was killed during a hostage rescue mission in October. Indeed, Defense Secretary Ashton Carter has said that the U.S. forces will continue to take part in such direct combat missions.

That raises the specter of the U.S. special operations forces facing another Black Hawk Down moment in Syria. During the incident in 1993’s Operation Gothic Serpent in Somalia, a group of Delta Force operators and U.S. Army Rangers were caught in a massive ambush after one of the 160th SOAR’s MH-60 Black Hawks was shot down. More than eighteen Americans were killed and their bodies paraded through the streets of Mogadishu while U.S. Army aviator Mike Durant was held captive for nearly two weeks—resulting in a massive propaganda victory for the enemy.

As U.S. special operations forces step their activity in Syria—the isolated American forces face even greater risks than their forbears. That’s especially true if U.S. forces undertake more high-risk direct action missions—such as raids or hostage rescues. ISIS is far more adept at the propaganda war than their Somali counterparts of the 1990s.