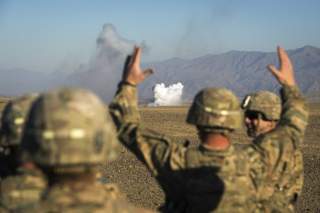 The evidence is unambiguous and painfully clear: The notion that we can fight terrorists “over there so we don’t have to face them in the United States of America” is a manifestly flawed premise that has failed to keep our nation safe.

International terrorists do pose a legitimate threat to the U.S. homeland, and our government’s primary function is to keep us safe—but we must fight terrorism correctly and effectively.

The U.S. government must first consider the nature of the threat. International groups, such as Al Qaeda, whose aims include attacking the United States or its citizens, should be the focus of anti-terror efforts. These are mainly shadowy organizations that plan specific acts of terror against U.S. targets. It is critically important to understand that international terror groups do not need to control specific pieces of terrain to plot their evil deeds.

The vicious men who perpetrated the heinous attacks against our people on September 11, for example, did not need Afghanistan to hatch, organize and then carry out the attack. Any location worldwide could have been used; in fact, the vast majority of the actual preparation took place in Germany, Florida, Maryland and other U.S. and international locations.

Thus, depriving Al Qaeda (or any international group like it) of any piece of terrain imposes no more than an inconvenience to them because they simply shift their base of operations to the next location available—or online. Thus, spending sixteen years, thousands of American lives, and hundreds of billions of dollars to kill radical terrorists faster than they are generated has failed—and has not enhanced U.S. security.

The vast majority of the terror organizations that threaten the United States have their origins in the Middle East. The basis from which their perverted grievances most often arise are from centuries-old religious disagreements. Whether one considered Al Qaeda, ISIS, Muslim Brotherhood, or any number of other groups, we will never be able to go to lands in the Middle East and kill them all. It is literally impossible. To blindly continue trying to do so will be to condemn our efforts to permanent failure.

The longer American military power is used overseas to fight terror groups (regardless of the threat they pose to our homeland), the more worn out our military will become; the less capable it will be to defend the country from serious, conventional threats; and our security will markedly worsen. But don’t expect anyone in Washington to change course until they’re forced to acknowledge this strategic error. Absent a more engaged American public and Congress, the establishment is on a path to double (or in some cases, quadruple) down on failure.

In 2014, the Islamic State (ISIS) captured large swaths of Syria and Iraq, threatening the regimes in Damascus and Baghdad but not Washington. The Obama Administration could have best secured our interests by improving the defense of our borders, focusing increased intelligence assets on ISIS to ensure they were not able to attack the United States, and using diplomatic and economic means—like selling arms to local anti-ISIS forces—to defeat those radicals.

Instead, Obama aligned America with unstable and unreliable radical Islamic rebel groups in Syria (sometimes arming groups on opposite sides of the same conflict) and the government in Iraq. He ordered the U.S. military to provide air power, armed drones, military trainers, ground controllers, and special operations troops to physically engage ISIS on the ground and retake terrain from ISIS, especially to liberate Raqqa in Syria and Mosul in Iraq.

As should have been clear from the summer of 2014, even the successful accomplishment of this objective did nothing to diminish the threat of radical Islamic terror (instead, driving these radicals underground or back into other countries in Africa and elsewhere), nor did it lower the risk of terror attacks on the U.S. homeland.

Despite this oft-validated reality, Washington policymakers persist on trying to use conventional U.S. military power abroad in anti-terror operations. Secretary of Defense James Mattis announced last week that even after ISIS had been driven from Syria, U.S. troops would remain to prevent the emergence of “ISIS 2.0.” Regardless of the fact ISIS has been driven from Iraq—and despite the demonstrated abilities of the Iraqi Security Forces and Shia militia to defend their own country—U.S. troops also will remain in Iraq.

And though it is a certainty that fifteen thousand U.S. troops will not be able to bring the Taliban and other terror groups in Afghanistan to the negotiating table when one hundred thousand troops couldn’t do it during the Obama surge, the White House has signaled that it will leave those troops there indefinitely. Perpetual fighting in Afghanistan where few, if any, terrorists striking in the West in the past decade have originated, will likewise not improve our security over here.

In 2014, ISIS was restricted to Syria and Iraq. Today it has affiliates in Afghanistan, Egypt, Algeria, Libya, Philippines and Indonesia. It has also allegedly inspired people to launch attacks in no fewer than twenty-nine different countries. Fighting ISIS over there has succeeded only in spreading its members around the globe, boosting its overall numbers and increasing the terror threat to the United States.

Using conventional military power abroad to solve violent, internal political problems is not effective, and it squanders the limited resources available to the U.S. military for modernization on peripheral concerns instead of core interests.

Focusing U.S. military power on so many terror threats abroad costs hundreds of billions of dollars a year and prevents America’s armed forces from training and equipping for other things that may one day pose an existential threat to the United States. If the White House will not recognize these truths, then the last line of defense may be Congress reimposing its constitutional authority over the executive branch.

If Congress continues to fail America, however, the threats to the country will only expand until one day it suffers an egregious attack, possibly from a well-funded and organized terrorist. Perhaps its military may even discover when it fights a major power that it is insufficiently prepared to defend itself.

Image: A U.S. soldier in Dragon Company of the 3rd Cavalry Regiment celebrates a direct hit during a mortar exercise near forward operating base Gamberi in the Laghman province of Afghanistan December 26, 2014. REUTERS/Lucas Jackson