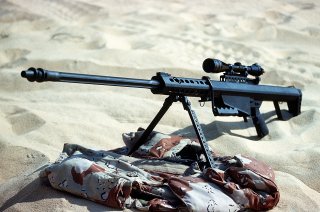 While some gun makers are known for all varieties of firearms from sporting rifles to shotguns for home defense to handguns, Tennessee-based Barrett Firearms Manufacturing is known for one type of weapon: semiautomatic rifles chambered for the .50 BMG round. Its Model 82 has become the ultimate in “sniper rifle” platforms—and simply put there is nothing else like it.

There had been prior attempts to create an ultra high caliber military rifle and the first efforts included the German Tankgewehr M1918, which developed as an anti-tank rifle at the end of World War I. Prior to the World War II, the British Boys Anti-Tank Rifle, the Finish Lahti, Swiss Solthurn, Japanese Type 97 and the Soviet’s Sowetskoe PTR Sholoklov 38 were all developed as well. Yet all of those weapons were designed to take out a tank or other armored vehicles.

By the middle of World War II, the thickness of armor had increased enough that these weapons could do little if any significant damage. Some saw use as "sniper rifles" in some instances during the war, but most snipers stuck with the average rifle caliber.

Ronnie G. Barrett had another idea and at the tail end of the Cold War revisited the concept of a large caliber rifle—in this case .50 calibers—to take out hard targets, which included lightly armored vehicles and other equipment. The idea was that a shooter from a great distance could do significant damage with a bullet that costs around $1!

Unlike those earlier attempts, what also set Barrett apart was the fact that he has been credited with designing every single part of the original M82 model personally. ‘’

Moreover, he founded his company, headquartered in Murfreesboro, Tennessee, in 1982 with the sole purpose of developing such firearms and nearly thirty years later he has mostly succeeded. While the gun allowed a trained marksman to hit a target at nearly two thousand yards the M82 wasn’t a direct hit when it was released. The U.S. military tested the weapon was at the XM107—and it was originally intended to be a bolt-action sniper rifle, but the Army determined there was little if any need for it. However, the Army did eventually move forward with Barret's semiautomatic design.

Even then the M82 was unproven until Operation Desert Storm and the Gulf War, but then militaries around the world saw the potential with the M82A1 version. This has led the company to develop several other models including the M95, M99 and M99-1. The U.S. military employs the M82A3 version as well as the M107 model as “anti-material rifles,” where it is used against small watercraft, radar equipment, missile launchers and even stationary enemy aircraft.

Despite the success the weapon has had in combat operations around the world, the U.S. military has sought to phase out the weapon.

One factor has been the rifle’s ability to endure the harsh realities of combat. There was even a situation where a Don Cook, a marine veteran who maintains M107s, received a call from another marine who was pinned down and needed “customer service” for his weapon. While Cook was able to help out the other marine over the phone, it was a reminder that a rifle that doesn't work is just a fancy club!

Because it is chambered for that .50 BMG round, the Barrett has gotten its moment in the spotlight and not the way a gunmaker would desire. Even as it takes a trained individual to make successful shots at the rifle’s extreme range, the state of California banned civilian sales of the .50 BMG-caliber rifles. As a result, Barrett announced it would no longer sell to or service any of its rifles in the possession of any California government agency.