Blast from the Past: Soviet-Era Tu-160M2 Is More Lethal Than Ever 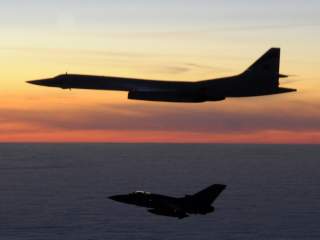 Moscow currently has sixteen of the original version of the Mach 2.0-capable bomber, which are the last surviving examples of the thirty-five aircraft built by the Soviet Union before its demise. Moscow hopes to build fifty new Tu-160M2 aircraft to upgrade its aging strategic bomber force.

“I believe that in 2019 this plane, upgraded and manufactured, will make its maiden flight,” Col. Gen. Viktor Bondarev, commander of the Russian Aerospace Forces told the Moscow-based TASS News Agency on March 2.

Russia made the decision to extend the development of the Tupolev PAK-DA in favor of the Tu-160M2 in 2015. Serial production of the new Blackjack variant is expected to start in 2023. According to Russia’s deputy defense minister Yuri Borisov—as cited by TASS—the Tu-160M2 has been fundamentally upgraded with completely new mission systems and other improvements over the existing M variant. “This will be essentially a new airplane, not a Tu-160 but a Tu-160M2,” Borisov told RIA Novosti last year.

Details on the exact nature of the Tu-160M2 upgrades are scarce. Presumably, Tupolev has made long-overdue adjustments to the airframe that were supposed to have been implemented during the Blackjack’s original production run. However, those tweaks are likely to be fairly minor. The major upgrades are almost certainly going to be focused on the bomber’s avionics suite.

Russia’s Radio-Electronic Technologies Concern (KRET) is working on developing the new avionics suite for the Tu-160M2. “Today we can say with confidence that the new aircraft will be constructed using the elements of integrated modular avionics (IMA),” the company told Russia’s state-owned RIA Novosti. “In the project to modernize the Tu-160, KRET will be creating new on-board systems, controls, a gimbal-less inertial navigation system, electronic warfare complex, fuel use monitoring systems, as well as weapons control systems.”

Some of the new avionics could find their way onto the PAK-DA, which is being developed in parallel to the Tu-160M2. “The resumption of production of the Tu-160 will mobilize all research and manufacturing facilities of concern in this area and create an ideology for a fundamentally new approach to be implemented in the framework of the project of creation PAK-DA,” KRET told the Russian outlet.

While much of the aircraft will be new, the Tu-160 will nonetheless retain its original nuclear deterrence mission. Unlike the stealthy Northrop Grumman B-2 or future B-21, the Russian bomber primarily relies on a combination of blistering speed and nuclear-tipped cruise missiles to deliver its doomsday payload.