‘A Great Day’: WHO Declares Polio Eradicated on African Continent 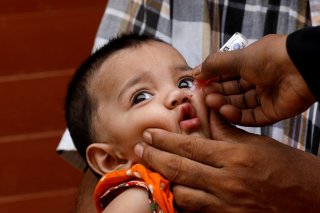 After nonstop work for more than two decades, the World Health Organization has declared that polio has been eradicated from Africa.

“Today we come together to rejoice over a historic public health success, the certification of wild poliovirus eradication in the African region,” WHO Director-General Tedros Adhanom Ghebreyesus said during a livestreamed event.

“The end of wild polio in Africa is a great day. Your success is the success of the world. None of us could have done this alone.”

Once a common virus, polio is transmitted through contaminated water and food or contact with an infected person. In some young children, the disease can affect the nerves and cause muscle weakness or paralysis, which can sometimes be fatal.

There is no cure, but it is easily preventable by the polio vaccine.

Since 1996, governments and nonprofits have been working toward eliminating the virus from the African continent with sustained vaccination campaigns. Nearly nine billion polio vaccines have been delivered to the region, according to the WHO.

“This moment is Africa’s to celebrate and to savor, and I want you to know that CDC stands with you today, until the day that polio is finally eradicated,” Redfield said in a prerecorded interview.

“You have demonstrated how much can be achieved when determination, partnership and resources come together, no matter the circumstances.”

Gates called it a “historic milestone, and a public health triumph for Africa.”

Health officials waited four years since the last case was diagnosed before making the declaration.

“The last case of wild poliovirus in the region was detected in 2016 in Nigeria,” the WHO said in a statement.

“Since 1996, polio eradication efforts have prevented up to 1.8 million children from crippling life-long paralysis and saved approximately 180,000 lives.”

The WHO, however, is still on the lookout for circulating vaccine-derived poliovirus, in which a weakened virus used to make the oral vaccine can sometimes survive in populations that are under-immunized. If it circulates long enough, it can become dangerous to the public.

“The small risk of circulating vaccine-derived poliovirus pales in significance to the tremendous public health benefits associated with the oral polio vaccine,” WHO says on its website.

“Every year, hundreds of thousands of cases due to wild polio virus are prevented. Well over ten million cases have been averted since large-scale administration of oral polio vaccine began twenty years ago.”

Southeast Asia was the last region to eradicate polio. Wild strains of polio only circulate now in two countries: Afghanistan and Pakistan.