‘Bolt Out of the Blue’ - How the U.S. Military Could Be Completely Destroyed 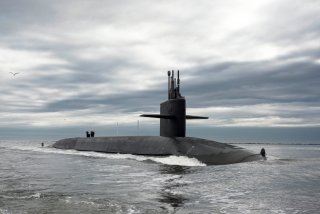 It’s called “Bolt out of the Blue,” a massive, unwarned nuclear weapons attack intended to surprise, overwhelm and ultimately destroy an enemy before there could be a chance to respond.

However unlikely, the prospect that a potential adversary might contemplate this kind of effort, which would seek to blanket and instantly neutralize any counterattack options, is something Pentagon strategic thinkers have considered for decades.

It is precisely this kind of contingency which, among other things, inspired the third leg of the triad: submarine-launched nuclear-armed ballistic missiles able to ensure a catastrophic and decisive second-strike response. This reality, essentially ensuring the destruction of any potential attacker contemplating a “bolt out of the blue” attack, may be the main reason why one has never happened.

This is certainly the thinking of Adm. Charles Richard, Commander of U.S. Strategic Command which oversees the U.S. nuclear weapons arsenal.

“We made bolt out of the blue unlikely. Ballistic missile submarines, the -- the responsiveness of the intercontinental leg, our postures, our policies, the way we execute. The reason bolt out of the blue is unlikely is because it's probably not going to work; right. And so we have to be careful when we make future decisions that we don't forget how we got here, lest we return ourselves to a world we don't want to be in,” Richard said.

Richard made this point in the context of explaining the risks associated with any effort to disarm, massively reduce or remove any element of the nuclear triad. The triad, which includes ICBMs, nuclear-armed aircraft, and ballistic missile submarines, may be the primary reason the world has not seen a massive great power world war since WWII, a devastating conflict which took millions of lives.

As part of this conceptual discussion, Richard was asked about comments from some lawmakers and disarmament officials who raise the argument that there simply may not be a need for the land-launched ICBM leg of the triad. Should such a position be adopted as any kind of new deterrence policy, it introduces the possibility that Air Force’s emerging Ground Based Strategic Deterrent new ICBM could be eliminated. While Richard was clear to say he offers advice but follows the guidance and direction of commanders and decision-makers tasked with making those decisions, he was clear with his advice that such an idea would not be advisable at all, and even be quite dangerous. Substantially altering or reducing the existing nuclear triad configuration and essential structure, he said, could introduce extremely serious risks. Richard said he believes the U.S. needs ICBMs.

“There is a total amount of capability and capacity that's required to execute the responsibilities that I have been given. I need the -- the forces that we have, to include the intercontinental ballistic missiles, to be able to accomplish all of that,” Richard said.