A ‘Collateral Victim’: Africa Feels the Pain of the Russo-Ukrainian War 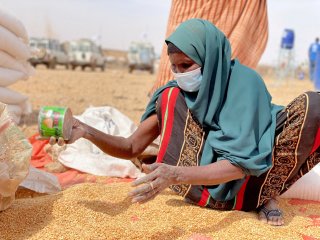 In his remarks commemorating Africa Day, the anniversary of the African Union’s founding on May 25, 1963, African Union Chairman Moussa Faki Mahamat described Africa as a “collateral victim” of the Russo-Ukrainian War, which has sharply impacted global oil and grain prices and disrupted imports of food to the continent.

“Africa has become the collateral victim of a distant conflict … between Russia and Ukraine,” Mahamat said. “By profoundly upsetting the fragile global geopolitical and geostrategic balance, it has also cast a harsh light on the structural fragility of our economies.”

The chairman identified the food crisis as the “most emblematic” sign of Africa’s fragility. He noted that the continent’s economies have been disrupted by climate change, the COVID-19 pandemic, and most recently the Russia-Ukraine war, which began in its most recent iteration on February 24 after Russia invaded Ukraine from the north, south, and east. The invasion is estimated to have cost Ukraine nearly half of its annual gross domestic product (GDP), and the Russian blockade of Ukraine’s Black Sea ports has made it virtually impossible for Ukraine to export its grain.

Mahamat’s assessment of the food shortage also attributed it to a “shrinking world supply of agricultural products and a soaring inflation of food prices.” He added that all African countries were opposed to “terrorism, violent extremism, and transnational crime.”

Prior to the Russian invasion, Russia and Ukraine together produced around one-third of the world’s wheat and two-thirds of its sunflower oil, which is widely used as cooking oil in developing nations.

The United Nations has also raised concerns about the effect of the Russian invasion on the global availability of food, with UN Secretary-General Antonio Guterres warning that the war was “creating a perfect storm for developing countries, especially in Africa.”

“This crisis is resulting in soaring costs for food, energy, and fertilizer, with devastating consequences on nutrition and food systems,” Guterres said. He added that the crisis would “mak[e] it even more difficult for the continent to mobilize the financial resources needed to invest in its people.”

However, there has been speculation that rising food prices could also help to promote increased domestic agricultural production in Africa, where farms are typically less mechanized and therefore less efficient than those in North America and Europe.