The ‘Green New Deal’ Is Breaking the Left Apart 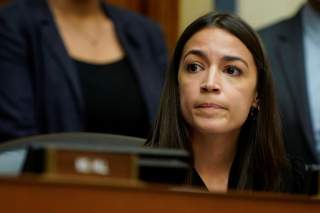 The AFL-CIO is absolutely right. The $93 trillion Green New Deal would bankrupt this country while throwing millions of Americans out of work.

Since the time of Franklin Delano Roosevelt, working-class union members have been the backbone of the Democratic Party. The left claimed to advocate workers’ rights and was seen, rightly or wrongly, as the party who fought for the little guy.

Well if it wasn’t clear before, it’s clear now—times have changed.

The election of Donald Trump to the presidency, aided by tens of thousands of Obama voters in states like Pennsylvania, Wisconsin, and Michigan, was the first sign of a political realignment.

Now, the “Green New Deal” is highlighting these cleavages in stark terms, with the nation’s largest union organization forcefully coming out against it.

Last week, the AFL-CIO sent a letter to the bill’s lead sponsors—Sen. Edward Markey, D-Mass., and Rep. Alexandria Ocasio-Cortez, D-N.Y.—expressing its opposition to the proposal on behalf of the 13 million workers the union represents.

“The Green New Deal resolution is far too short on specific solutions that speak to the jobs of our members and the critical sections of our economy. It is not rooted in an engineering-based approach and makes promises that are not achievable or realistic,” wrote the AFL-CIO’s energy committee.

The AFL-CIO is absolutely right. The $93 trillion Green New Deal would bankrupt this country while throwing millions of Americans out of work. Unemployment and deficits would skyrocket, and energy shortages would plague our electric grid. These socialist policies would wreak havoc on our freedom and way of life, as they have done throughout history.

Proponents of the Green New Deal argue that all of these jobs will be replaced by “green” energy jobs, but it is unreasonable to expect these magical “green” jobs to even come close to replacing the millions of quality jobs we have in the energy industry right now.

This letter will not soon be forgotten. It represents a major shot across the bow of the far left by the working class of the traditional left. It’s made even more significant by the fact that Ocasio-Cortez has made a concerted effort to woo the labor movement.

Included in the Green New Deal resolution is a pledge to create “high-quality union jobs that pay prevailing wages.” Ocasio-Cortez also called for “strengthening and protecting the right of all workers to organize, unionize, and collectively bargain.” In other words, she took great pains to pre-emptively appeal to labor unions.

But the AFL-CIO correctly realized that her pledge is nothing more than hollow words. You cannot throw millions of people out of work and expect new jobs to fall from the sky.

That the AFL-CIO would attack her signature policy proposal with such critical language signals just how deeply workers feel threatened by it. And it is more evidence that big labor’s influence on the left is waning.

Major Democratic figures are lining up behind the Green New Deal, even as House Speaker Nancy Pelosi and billionaire Michael Bloomberg express unease about it. It’s clear where the left is moving—and who’s being left out.

The union’s 13 million members are a vital grassroots asset for the left. In previous years, locking down this support would have been near the top of any Democrat’s priority list. Democrats still need their support. The question is whether they care enough about retaining that support to pull back from Ocasio-Cortez’s climate extremism.

If they choose the path of the Green New Deal, they will likely be rudely awakened to find that their once-reliable base has left them behind for a president who speaks to their needs.

Time will tell if major Democratic figures buckle on their support of the Green New Deal, but one thing is clear—we are living in fluid, ever-changing political times.