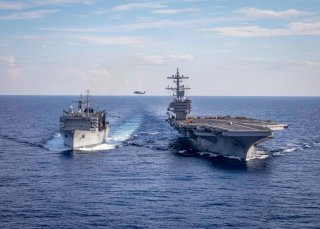 “Our ability to deter aggression and defend the alliance is stronger when we work together with our allies and partners like Croatia,” said Rear Adm. Dennis Velez, commander of the George H.W. Bush Carrier Strike Group in a U.S. Navy statement covering the deployment.

“Our Sailors have worked with and shared cultural exchanges with Croatian Sailors and people throughout our deployment. Just recently, USS Leyte Gulf (CG 55) sailed with the Croatian missile boat Dubrovnik (RTOP-42) during the recent NATO vigilance activity Neptune Strike 22.2,” he added.

“But most importantly, the Croatian government provided safety for a number of our aviators and aircraft early in deployment when they needed to divert due to weather. That speaks to the Croatian spirit and the imperative of relationships in our collective defense.”

The war in Ukraine was not specifically mentioned in the U.S. Navy statement but the conflict is clearly still at the forefront of European allies’ concerns. It is a concern reflected in the statement’s language.

“Strengthening partnerships during the port visit to Split builds enduring relationships and emphasizes our shared commitment to promoting safety and stability within the region, while seeking opportunities to enhance our interoperability as NATO allies,” the Navy statement said.

“U.S. Navy ships frequently stop in Croatia for maintenance and mutual security operations. Croatia is a hub for U.S. Navy cooperation, with the port city of Rijeka economically benefiting from over a billion Kuna in contracted services since 2011.”

It added that the George H.W. Bush Carrier Strike Group is “on a scheduled deployment in the U.S. Naval Forces Europe-Africa area of operations, employed by U.S. Sixth Fleet to defend U.S., allied and partner interests.”

The Russo-Ukrainian War has shifted in Ukraine’s favor in recent months as the embattled country has managed to claw back roughly half the territory Russia has seized since late February.

Despite Russia’s nuclear threats, the post-World War II rules-based order has clearly been upended in Europe and elsewhere. Eyes remain fixed on Taiwan, the imperiled Asian democracy on China’s doorstep. The Western response to events in Ukraine is certainly being watched by China as well.