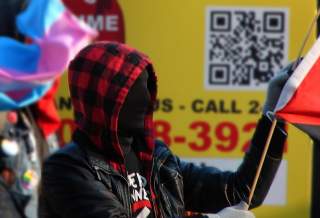 It’s not, they can be very indiscriminate in their violence, they believe they’re part of a vanguard that will overthrow the government. This is a very extreme ideology and I’m not sure if people like Chris Cuomo or Don Lemon at CNN know this when they basically act as apologists for Antifa.

I would hope that with me continuing to speak out that the needle on this discourse can change.

I didn’t ask to be such a public figure. Three weeks ago, I was the person behind the camera and the person who’s doing the writing. Now, I’ve been doing all this public speaking and the next part for me now is I want justice, justice through the legal system.

I don’t want to fight anybody, but three and a half weeks after what happened to me, there’s been no arrests and I don’t want to be cynical about Portland Police, but there were four ongoing investigations of Antifa violence to me and doxing before June 29 and nothing was done.

So forgive me if I’m not entirely confident that they are going to do a thorough criminal investigation.

Of course, another issue that compounds all this is that the militants who beat me and robbed me were amassed.

Trinko: You mentioned you might be able to take legal action. Could you expand on that?

Ngo: I think my civil rights were violated, my First Amendment rights. I was a journalist documenting event and Antifa has continuously menaced and attacked not just myself, but others, other journalists in Portland as well.

The citizen journalists, the independent journalists are the easy targets, right? But they’ve also gone after reporters who work for the local broadcast, television news.

I, unfortunately, I’m not the right type of victim for the legacy civil rights organizations such as ACLU or the SPLC, neither of which, as far as I know, have said anything in supporting me or condemned what happened to me.

Actually, the Human Rights Campaign, which is America’s largest gay rights organization, their communication stuff in the immediate aftermath of my beating put out a number of tweets calling me a “weasel” and that I came looking for this and got exactly what I wanted.

So with that stated, fortunately, I’ve been taken on as the first client for Publius Lex. That’s a civil rights nonprofit started by attorney Harmeet Dhillon.

I have so much gratitude for that because I completely underestimated the amount of money and time it takes to get counsel and to potentially discover and find evidence and all that.

So there’s a legal fund. And even with the attorney working for free, there’s so much overhead cost, there’s so many costs related to going through the legal system.

Trinko: How can people donate to that fund if they’re interested?

The amazing thing about the age we’re in now is you can crowdfund a legal funding.

I feel so thankful that [so many people] see what happened to me as an injustice, and not just me as an individual, but rather emblematic of some other larger systemic issues that are in Portland. So that’s what the legal fund is for.

It’s amazing to me that those who are on the left seem to have all this endless money for law fare. And I would like to see conservatives start investing funds in causes for civil rights.

Trinko: OK. Well, Andy Ngo, thank you so much for joining us.