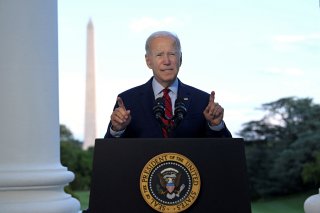 Ayman al-Zawahiri, the shadowy right-hand man of Osama bin Laden who assumed leadership over the group following his death and oversaw its expansion around the world, was killed in a drone strike in Afghanistan on Monday, according to President Joe Biden.

“Justice has been delivered and this terrorist leader is no more,” Biden announced during a special televised address broadcast from outside the White House on Monday evening. The president revealed in his remarks that U.S. forces had launched the operation against Zawahiri after learning his location in Kabul, where the al-Qaeda emir had moved following the Taliban takeover of Afghanistan to rejoin members of his family.

“After carefully considering the clear and convincing evidence of [Zawahiri’s] location, I authorized a precision strike that would remove him from the battlefield once and for all,” Biden said. He called the mission a “success,” claiming that no members of Zawahiri’s family or other civilians had been killed in the operation. Anonymous U.S. officials later claimed that the CIA had carried out the attack, launching missiles at Zawahiri while he stood on the balcony of his home in Kabul.

It is unknown whether the Taliban, which has controlled Kabul since August 2021, helped to facilitate the al-Qaeda leader’s presence in the city. Doing so would have marked a clear violation of the Doha Agreement signed by U.S. and Taliban leaders in 2020, which required the militant group to cut all ties with al-Qaeda. The Taliban government did not comment on the nature of its relationship with Zawahiri, but it swiftly condemned the attack, describing it as a “violation of international principles” of state sovereignty.

A surgeon from Egypt’s upper class, Zawahiri became involved in Islamist politics after he organized the deployment of Arab volunteers to Afghanistan to fight against the Soviet Union during the 1980s. After the Soviets left Afghanistan, Zawahiri participated in an unsuccessful Islamist insurgency against the Egyptian government, before joining forces with bin Laden as one of the leaders of al-Qaeda. The two men masterminded the attacks on the U.S. embassies in Nairobi, Kenya and Dar es Salaam, Tanzania in 1998, the bombing of the USS Cole in 2000, and the September 11 attacks in 2001, catapulting bin Laden to worldwide infamy and prompting the U.S. invasion of Afghanistan.

Following bin Laden’s death at the hands of U.S. special forces in 2011, Zawahiri took control of al-Qaeda, rebuilding its strength and growing its affiliate branches, including Al-Qaeda in the Arabian Peninsula (AQAP) in Yemen and the group formerly known as Jabhat al-Nusra in Syria. However, al-Qaeda—once a byword for brutality and terror in the Western world—was also surpassed in strength and notoriety by the Islamic State (ISIS) terror group in the mid-2010s. By the end of the decade, ISIS was territorially defeated in Iraq and Syria, but the group has continued a low-level insurgency in both countries and remains active as a rival extremist group in Afghanistan.

At the time of his death, Zawahiri had been the subject of a $25 million bounty as part of the State Department's Rewards for Justice Program. It is not yet known if any informants will receive any portion of the reward.