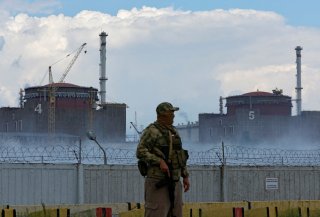 The Ukrainian government announced on Sunday that a Russian attack on the Zaporizhzhia power plant—the largest nuclear plant in Europe—had injured a worker and caused moderate damage to the facility, raising fears of a potential leak of radioactive material.

Energoatom, a public Ukrainian company that operates the country’s active nuclear facilities and oversees the decommissioning of the defunct Chernobyl plant, wrote on its official Telegram channel that Russian forces had fired rockets at a spent fuel storage facility within the plant. Damage to three radiation detectors makes it impossible to determine whether any radiation had leaked. The statement added that none of the casks containing spent fuel appeared to be damaged, meaning that the site probably remained safe, but its safety could not be guaranteed with additional strikes.

“This time a nuclear catastrophe was miraculously avoided,” the statement read. “But miracles cannot last forever. The actions of [Russian forces] must be urgently put to an end in order to protect Ukraine and the world from a nuclear disaster.”

The Russian military immediately denied attacking the site, asserting that it occupied the site, thus unlikely to fire on its own troops, and claiming that a Ukrainian rocket strike caused the damage. However, Energoatom also alleged that the Russian forces present at the facility had entered a bunker before the shelling, suggesting advance knowledge of the attack.

Ukrainian president Volodymyr Zelensky discussed the Zaporizhzhia strike in his nightly video address, describing it as an instance of “Russian nuclear terror” and calling for further international sanctions on the Kremlin. The Ukrainian leader also mockingly observed that Amnesty International, which had previously accused the Ukrainian military of endangering civilians, had yet to issue a condemnation, or even a “simple notification,” regarding the incident.

Rafael Grossi, the director-general of the International Atomic Energy Agency (IAEA), wrote in a statement that he was “extremely concerned” by the attack and demanded that both sides allow a team of international experts to visit the site and evaluate the damage.

“The shelling at Europe’s largest nuclear power plant…underlines the very real risk of a nuclear disaster that could threaten public health and the environment in Ukraine and beyond,” Grossi’s statement read. “Military actions jeopardizing the safety and security of the Zaporizhzya nuclear power plant is completely unacceptable and must be avoided at all costs.”