‘Ownerless’ Bitcoin Succumbs to the Coronavirus 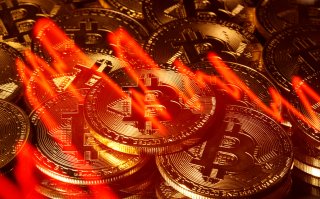 Amidst the turmoil in financial markets as COVID-19 spreads around the world, and while governments and central banks intervene to prop up economies coming under severe strain from real-world stresses, spare a thought for holders of bitcoin.

Since reaching a 2020 high of $10,500 on February 13, it fell to a low of $4,150 on March 13, recovering slightly but still erratically to around $5,000 on March 17. While the Dow Jones, FTSE 100, and S&P 500 indexes have also fallen dramatically over the same period — most notably on Monday March 16, as the enormity of the crisis began to be realized — bitcoin’s free-fall occurred earlier and (so far) has cut deeper into owners’ pockets than share market losses.

That bitcoin’s price behavior in the face of the COVID-19 crisis has been dramatically volatile like share prices has potentially addressed one of the outstanding academic questions about the economic characteristics of cryptocurrencies. That is, are they truly currencies in the same manner as the US dollar, British pound, or even gold, being (mostly) reliable stores of value responding as commodities to variations in supply and demand, or do they act more like company securities, with their values fluctuating in response to expectations about future performance and options?  Recent evidence appears to confirm the latter as more plausible.

Bitcoin emerged from the ashes of the 2008 global financial crisis as a decentralized alternative to fiat currencies controlled by central banks exercising monetary policy and governments exercising fiscal policy. Its appeal, along with that of copycat cryptocurrencies, was that the use of cryptography and clever mathematical algorithms rendered it largely impervious to attempts to counterfeit or manipulate it for political purposes. It was also held to be more democratic or egalitarian because the computer algorithms allowed critical governance decisions to be made by the distributed group of bitcoin stakeholders by way of computational node operation, rather than relying on centralized autocratic decisions. Indeed, it has been said that cryptocurrency systems are “owned by no one” and “governed by no one”.

Cryptocurrencies: No “owners” and no changes?

However, recent scholarship has found that the supposed strength of cryptocurrencies — the imperviousness of the transaction record and key operational characteristics embedded in system software — becomes a weakness when change becomes necessary, precisely because there is no single authority with the power to take unilateral actions. Most notably, this occurs when unexpected events render the existing arrangements less than optimal. Whereas it is quite clear in the case of fiat currencies that central bankers and governments can intervene to alter supply and the prices for their use, cryptocurrencies are exposed in times of unexpected crises. This is precisely because such interventions, while not impossible, are very costly and take a long time to bring about, unless the precise contingency has been anticipated and software algorithms are prepared in advance to allow changes to be activated in the future.

In the case of bitcoin, the rules embedded in software code releasing new coin supplies in response to transaction frequency alone created artificial scarcity, allowing the price of coins in circulation to escalate rapidly (“bubble”) in a manner similar to the share prices of firms anticipated to be more valuable in the future. But when unexpected events occur — such as a collapse in economic activity in the face of a catastrophe such as COVID-19 — the bubble bursts and values tumble. But whereas central bankers, governments, and even private sector can engage in activities that endeavor to shore up currencies and restore some confidence in firms’ future performance (and hence share prices), no such easy options exist for “unowned” cryptocurrencies such as bitcoin. They are fully exposed to the vagaries of market forces — both positive and negative —because they have no sovereign vested with the powers to act unilaterally in their interests.

It is noted that not all cryptocurrencies share bitcoin’s “ownerless” status and concomitant risks. “Permissioned” cryptocurrencies structured within formal trust governance arrangements reserving special powers for identified agents (e.g. Libra, in its originally proposed form) are less exposed to unexpected events and value fluctuations simply because there are identified stakeholders charged with stewarding them through good times and bad. These “hybrid” cryptocurrencies forfeit the complete decentralization of “unowned” bitcoin governance while at the same time harnessing the benefits of transparent and difficult-to-tamper-with decentralized ledgers. In the current crisis at least, bitcoin appears to be less favored than fiat currencies such as the US dollar as both a store of value and transacting instrument. Its governance is contributing to its lower desirability.

This article by Bronwyn Howell first appeared at the American Enterprise Institute.