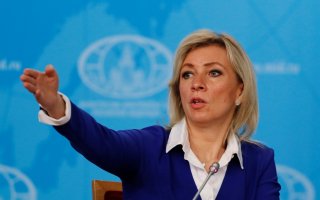 Top Kremlin officials said Moscow is open to negotiations with Ukraine as the Russian invasion nears its ninth month.

“We are still open to negotiations. We have never refused to have them. We are ready to negotiate, of course, taking into account the realities that are emerging at the moment,” Russian Foreign Ministry spokeswoman Maria Zakharova said during a briefing on Wednesday. Zakharova said, without elaborating, that there have previously been contacts between U.S. and Russian agencies and confirmed there could soon be bilateral consultations within the framework of the New START nuclear arms reduction treaty, according to Reuters.

Moscow has subtly shifted its tone in recent months on the feasibility of substantive negotiations to end the Ukraine conflict. “The direction has not changed, the special military operation continues, it continues in order for us to achieve our goals,” Kremlin spokesman Dmitry Peskov said last month, according to Reuters. “However, we have repeatedly reiterated that we remain open to negotiations to achieve our objectives.” Nevertheless, Peskov expressed doubt that such dialogue could take place “in the near future,” citing the “very, very hostile stance” taken by the West.

Ukrainian president Volodymyr Zelenskyy suggested earlier this week that he is open to talks with Moscow but with significant preconditions: the return of all occupied Ukrainian territory, reparations, and “punishment of every war criminal.” Zelenskyy’s new stance appears to be a reversal of his earlier decree forbidding peace talks with the Kremlin for as long as Russian president Vladimir Putin remains in power, though Kyiv’s conditions are likely a non-starter for Moscow. The change to Zelenskyy’s position came several days after a Washington Post report that the Biden administration is privately urging Ukraine to signal its openness to talks with Russia as part of an effort to maintain international support for Kyiv.

The Russian embassy in Indonesia told CNN on Thursday that Putin will not attend the Group of Twenty, or G20, meeting in Bali next week. Putin will instead be represented by Russian foreign minister Sergey Lavrov, said Yulia Tomskaya, the chief of protocol at the embassy, though the Russian president may still join one of the meetings virtually. The announcement comes on the heels of Kyiv’s threat to boycott the G20 summit if Putin attends the event.  Indonesian president Joko Widodo, who faced pressure from Western countries to exclude Russia altogether, invited Zelenskyy to the summit in April as a compromise. It was previously reported that the White House was taking every possible step to avoid any contact between President Joe Biden and Putin at the summit. “We know what President Biden thinks about President Putin: he thinks he’s a killer, he thinks he’s a war criminal,” William Taylor, former U.S. ambassador to Ukraine, told Politico last month. “You don’t usually meet with killers and war criminals.”