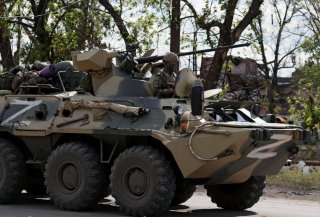 As Russian and Russian-aligned forces consolidate their control over Severodonetsk, a top official with the breakaway Donetsk People’s Republic (DPR) issued a stark warning for the remaining Ukrainian defenders trapped inside the city: “surrender, or die.”

Eduard Basurin, deputy head of the DPR, told reporters on Monday that the only remaining bridge connecting Severodonetsk to the nearby town of Lysychansk has been destroyed. “Severodonetsk is actually blocked after they blew up the last bridge that connected it with Lysychansk yesterday. Therefore, the Ukrainian military units that are stationed there remain there forever. They have two options: either follow the example of their colleagues and surrender, or die. They have no other option.”

Russian forces stormed the city of Severodonetsk, one of the last Ukrainian strongholds in the eastern Luhansk region, in late May. Russian and pro-Russian separatist officials reported after several days of heavy street fighting that most of the city’s residential areas were under Russian control. Ukrainian officials announced in early June that Ukraine’s armed forces had retaken large swathes of the city on the heels of a successful counteroffensive, but there is now widespread consensus that the city is almost entirely occupied by Russian troops.

Vitaly Kiselev, a top official with the separatist pro-Russian Luhansk People’s Republic (LPR), told Russian state media on Tuesday that up to 2,500 Ukrainian troops were holed up in the Azot chemical plant located in the city’s industrial zone. “Somewhere around 500-600 of these people are foreign mercenaries, considering that I frequently visited Severodonetsk and Rubizhne, and spoke with locals who said there were a lot of Poles there,” Kiselev added, according to Russian state news outlet RIA. Kiselev likened the present situation to the Azovstal siege in the southeastern port hub of Mariupol, where thousands of Ukrainian troops continued to resist from inside a metallurgical plant long after the rest of the city fell under Russian control. Ukrainian officials said around 500 civilians have taken shelter in the Azot plant.

On Tuesday, Russia’s Defense Ministry called on Ukrainian servicemen in Severodonetsk to lay down their arms. “We call on the official authorities in Kiev to show prudence and give appropriate instructions to the militants to stop their senseless resistance and withdraw from the territory of Azot plant,” the ministry said, adding that it guarantees “the preservation of lives and the observance of all norms of the Geneva Convention for the treatment of prisoners of war, as happened to your comrades who previously surrendered in Mariupol,” as per CNN. The Russian military also said it will open a humanitarian corridor for the evacuation of civilians at the Azot plant into Russian-occupied territory to the north of Severodonetsk on Wednesday.