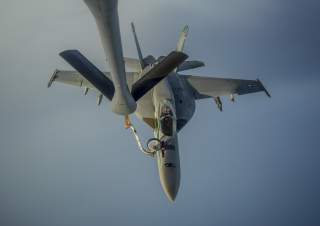 During the late 1980s, American and Iranian naval forces repeatedly skirmished in the Persian Gulf. Media coverage speculated that the fighting could escalate into a full-fledged conflict between the U.S. and Iran.

“No, we’re not going to have a war with Iran,” Pres. Ronald Reagan bellowed to reporters. “They’re not that stupid!”

The U.S. destroyed an Iranian frigate and crippled another one during the largest of such clashes in 1988, but it didn’t escalate into a wider war. The skirmishes were a side-effect of the eight-year-long Iran-Iraq War — and the so-called “tanker war” when both Baghdad and Tehran attacked shipping in the Persian Gulf.

Those tense days might have been the closest Washington and Tehran ever came to crossing the Rubicon. But nearly a decade later, the Clinton administration came close — perhaps even closer.

The death of Americans at the Khobar Towers brought back memories of another horrible attack. In 1983, Hezbollah blew up a much larger truck bomb outside the U.S. Marine Corps barracks in Beirut back, killing more than 240 American troops in an attack that journalist Robin Wright called “the largest loss of American military life in a single incident since Iwo Jima.”

At the Khobar Towers, a guard prevented the truck from directly entering the compound. Had he failed, many of the 372 others injured in the blast may well have died, too.

The Saudis reportedly had evidence showing that Iran was complicit, but refused to hand it over to the Americans out of fear of escalating the situation.

Clinton made it clear that if Iran was complicit in the attack — as the FBI and the broader intelligence community believed — he wanted a serious military response. He even informed Richard Clarke, his counter-terrorism adviser, that he did not “want any pissant half-measures.”

The Pentagon drew up military plans which ranged from launching cruise missiles at Iranian targets to undertaking a full-blown ground invasion of Iran. It appeared, however, that the agreed plan of action was to heavily bombard Iranian military targets in its Gulf provinces with air, missile and naval attacks.

However, that plan never came into fruition, owing to the circumstantial nature of the evidence and the fact the Gulf states were wary about the potential consequences.

“When the Saudis finally relented and turned over their evidence, the reform-oriented Khatami, who apparently had not been aware of the plot, had already assumed the presidency and the White House decided that military reprisals at that point would undermine the larger objective of establishing a diplomatic opening to Tehran,” wrote Malcolm Byrne, a researcher at George Washington University’s National Security Archive.

But the rapprochement with Iran fell through. One reason was because the FBI and the intelligence community believed that the regime had gotten away with murder at the Khobar Towers.

As is the case today, the Gulf states frequently accused Iran of using Shia populations in Arab countries to stir-up and foment trouble. In Bahrain, Shia Muslims outnumber Bahraini Sunni Muslims — although the country’s ruling monarchy is Sunni.

Less than a month before the Khobar Towers bombing, the Bahraini regime arrested 44 people on allegations of plotting a coup with Iranian assistance. For its part, the Saudi monarchy treats its minority Shia community as second-class citizens, and Riyadh has long claimed that Iran has tried to exploit the situation to its advantage.

Aside from Bahrain, the only other Arab country to have a Shia majority population is Iraq. In the 1990s Ba’athist dictator Saddam Hussein had ruthlessly repressed the Shia majority after a failed uprising in 1991.

But here, Washington’s concerns about Iranian influence receded away.

“We are not going to complain about any effort Iran makes to assist Shi’ites or others suffering under Saddam’s rule,” James P. Rubin, then a State Department spokesman, said in November 1998. “But we are not working with them [the Iranians] in any shape or form or soliciting their support.”

Notice he emphasized “any effort.” Which shows that just over two years afterWashington was on the verge of bombing Iran, it had no problem with Iranian efforts to help the Shia of neighboring Iraq.

Which aptly illustrates how, during the last three-and-a-half decades, Washington’s dealings, or lack thereof, with Tehran have been anything but simple and straightforward.

This article by Paul Iddon originally appeared at War is Boring in 2015.