“It was information warfare every day.”: How the U.S. Military Operated Side by Side with Russia in Syria 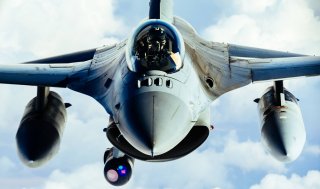 “It was information warfare every day.”

That is how the Commander of Operation Inherent Resolve against ISIS described his force’s communication with Russians during ongoing operations over Syria and Iraq.

Harrigian went on to explain that regular contact with the Russians, likely intended to deconflict airspace and avoid confrontation, greatly informed U.S, intelligence gathering operations. While he of course did not elaborate, likely for security reasons, he did refer to the general character of the interactions.

“We would talk to them 10 to 20 times a day. We learned a lot in terms of how they operate with the proxies they communicate with on the ground in Syria,” Harrigian added.

A special service unit tasked with information warfare operations, the 16th Air Force, has been fundamental to the process of learning and leveraging key dynamics regarding Russian behavior.

While of course not going into specifics, Harrigian did seem to reference these kinds of processes in terms of how they helped the U.S. coalitions discern, gather and analyze information. It also undoubtedly helped U.S. forces better understand certain characteristics potentially unique to the Russians, he explained.

“The 16th Air Force has been helping us understand how to find the opportunities to explore and highlight those activities that could be impacting the southern flank of Europe,” Harrigian said.

Information is increasingly becoming its own “weapon of war” to a greater extent than in years past. There are many reasons for this, including the rapid improvement in sensor speeds and processing technology, leading to a decrease in information-reliant “sensor to shooter time,” ubiquitous data sharing and massively improved networking.

Combat platforms, even large ones, are no longer narrowly configured attack systems but also key “information nodes” in an increasingly networked force.

Information sharing forms the backbone of the Air Force’s Advanced Battle Management System future ISR program and the Pentagon’s fast-developing Joint All Domain Command and Control initiative. Both of these efforts are grounded in the concept of information warfare networking across an entire force of platforms and nodes.

Data sharing, some of which is cloud enabled, and hardened transport systems such as cyber, video, radio and other kinds of datalinks are completely reshaping modern warfare.

While this brings unprecedented advantages, it highlights the need for proper safeguards and effective information warfare as adversaries could attempt to feed incorrect information to U.S. networks with far-reaching consequences.