This 1 Picture Could Be the Army's Future 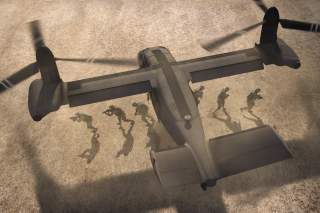 Senior Army leaders are now advancing and refining plans to speed up development and delivery of a new faster, more-lethal and high-tech Future Vertical Lift aircraft currently slated to be operational by the 2030s.

FVL is an Army-led joint program to build a family of next-generation aircraft to begin emerging in the 2030s, consisting of attack, utility and heavy-class air assets. Ultimately, the FVL effort seeks to replace the Apache, Black Hawk and Chinook.

“Left on its current path, 2030s is what we are looking at. The Army leadership desires to get this sooner. That is why a Cross-Functional Team is being stood up to figure out what needs to be done,” Maj. Gen. John Ferrari, Director, Program Analysis and Evaluation, G-8, told Warrior Maven in an interview earlier this year.

With technology demonstrations already well-underway, the service is working on Initial Capabilities Documents intended to outline weapons applications and a new tech-demonstrator drone to support the aircraft, senior Army developers said. .. (stay tuned for Warrior Maven detailed reports on this)

The current development strategy, which involves the construction of initial “demonstrator” aircraft from Bell and Boeing-Sikorsky teams, seeks to both leverage the most promising and cutting edge near-term technologies while engineering systems also able to align with longer-term plans. Rapid prototyping and experimentation are fundamental to this evolving process, Ferrari explained.

“We’ve got the world’s greatest helicopters. Now, the big decision is when do we bring in new technology and how it fits into the long-term plan,” Army Vice Chief of Staff Gen. James McConville, told a small group of reporters earlier this year.

Requirements for a medium utility FVL helicopter, include building a new aircraft able to reach airplane-like speeds while retaining a helicopter-like ability to “hover” and maneuver in close proximity with enemy ground forces.

Army plans also seek an aircraft able to reach speeds greater than 230 knots, hover in thin air at 6,000-feet and 95-degrees Fahrenheit, achieve a combat radius of at least 434 kilometers and be configured to include emerging sensors and mission equipment technologies likely to emerge by the 2030s.

As part of this equation, the future aircraft is intended to be able to use fuel-efficient engine technology to allow an aircraft to travel at least 800 kilometers on a single tank of fuel. Such an ability will enable the aircraft to operate more easily one a single mission without needing Forward Arming and Refueling Points, or FARPs.

A faster, more maneuverable helicopter that can fly farther on one tank of fuel would enable forces in combat to more effectively engage in longer combat operations such as destroying enemy targets or transporting small groups of mobile, lethal ground fighters. The new helicopter will also be designed to use next-generation sensors to find enemies on the move and employ next-generation weapons to attack them, Army officials describe.

“We will have to see where the technology is in order to determine what is feasible,” Ferrari said.

The Bell offering, called the V-280 Valor, seeks to advance tilt-rotor technology, wherein a winged-aircraft with two rotor blades over each wing seeks to achieve airplane speeds and retain an ability to hover and maneuver like a helicopter.

The V-280 Valor is designed to be slightly bigger than an existing Black Hawk helicopter and use 24-inch seats to carry 11 passengers with gear, Bell developers said. The V-280 Valor has already been flown and extensively tested; Bell has most recently presented a weapons/attack variant. (..stay tuned for Warrior Maven V-280 Valor profile..)

Bell intends to build upon and advance existing tiltrotor technology such as that which is currently operation in the Bell-Boeing V-22 Osprey aircraft. The Osprey has two rotating rotor blades which align vertically when the aircraft is in helicopter mode and then move to a horizontal position when the aircraft enters airplane mode and reaches speeds greater than 280 knots.

The V-280 Valor also has two propellers which rotate from horizontal airplane mode to a vertical position, which allows for helicopter mode. Bell officials have said their new aircraft will be able to reach speeds of 280 knots. Bell and Army officials explain that their V-280 Valor substantially advances tilt-rotor technology.

The V-280 Valor uses a straight wing versus a V-22 which is not straight. Bell is also building additional flapping into the rotor system and individual controls that should allow for increased low-speed maneuverability, Army and Bell developers added.

Officials say the Osprey continues to perform well in a wide range of missions and has been selected by the Navy to perform the Carrier On-board Delivery or COD mission transporting troops, equipment and weapons on-and-off surface ships.

The Sikorsky-Boeing demonstrator, called the SB>1 Defiant, uses a coaxial rotor system configuration. This is a design structure, referred to as a compound configuration, which relies upon two counter-rotating rotor blades on top of the aircraft and a thrusting mechanism in the rear.

“To make a rotorcraft go fast you have to off-load the rotor lift onto something else or else you run into problems when you try to reduce the speed of that rotor. Typically, you do that with a wing but Sikorsky-Boeing came up with a lift-offset design,” an Army FVL program manager told Warrior Maven last year.

The pusher-prop on the back of the aircraft is a small propeller behind the counter-rotating rotor heads. It is what can give the aircraft airplane-like speeds. It operates with what’s called positive and negative pitch, allowing the aircraft to lean up or down and move both forwards and backwards, according to written materials from Boeing.

Revealed: Why Bell Helicopter's New V-280 Could Be a Game Changer on the Battlefield