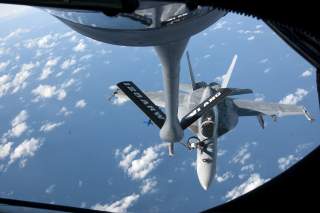 The U.S. Navy's carrier air wings lack the range to win in battle with Chinese and Russian forces, according to one new study.

The Navy's nine front-line wings "lack the range, endurance, survivability and specialization to carry out the operational concepts needed to defeat great-power militaries," the Washington, D.C.-based Center for Strategic and Budgetary Assessments warned in its December 2018 report "Regaining the High Ground at Sea."

During the Cold War, the typical combat aircraft in a U.S. Navy carrier air wing -- say, an A-6 bomber or F-14 fighter -- could range as far as 1,800 miles with a seven-ton payload.

But the wings changed as the world did, the CSBA report explained. "Following the Soviet Union’s dissolution in 1991, the Navy faced a situation it had not encoun­tered since the birth of naval aviation: the lack of a peer competitor.”

By 2018 the range of a typical carrier combat plane with a nine-ton payload had shrunk to just 1,300 miles. Meanwhile, Russia and China were developing longer-range anti-ship missiles and other weapons capable of threatening a carrier and its planes.

The think tank proposed adding a theoretical new long-range fighter it called the “FA-XX” plus unmanned combat air vehicles to the air wings before 2040. "The addition of long-range UCAVs and FA-XX fighters would increase the average range of combat aircraft in the CVW."

As a bonus, the new drones could be smaller than an F/A-18 is, allowing a carrier to embark more aircraft during a crisis than a flattop can do today.

"Although the proposed 2040 CVW includes a few more aircraft than today’s CVW, it would only take up 60 F/A-18C-sized spots compared to the 70 spots in today’s CVW. The maximum number of spots available in a Nimitz-class CVN is about 98 to 104, enabling the future CVW to incorporate additional aircraft to address emergent mission requirements."

"The proposed 2040 CVW will cost more than Navy’s planned CVW, but the Navy may have no choice but to incur these additional costs or decide to relegate carrier aviation to a niche capa­bility dedicated to permissive operations against less stressing threats," the study stated. The Pentagon could free up some money for new aircraft by reducing the number of wings to eight, it advised.