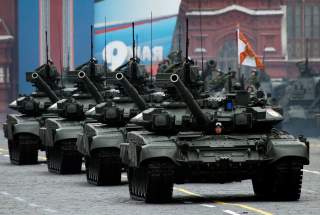 Key point: Moscow might have a decent military, but without a comparable healthcare system it cannot sustain high casualties.

Between the 1941 German invasion to the Soviet victory in Berlin in 1945 and the invasion of Manchuria that August, the Red Army would suffer more than 11 million dead and 15 million wounded — a shocking toll unprecedented and unmatched in history. To wage such a war, the Soviet Union relied on a total mobilization of its society and economy.

To treat such enormous numbers of wounded, the job fell to the USSR’s centralized health care system.

Military and civilian hospitals participated — the latter out of necessity, and the conflict led to important innovations in medical treatments, particularly for frostbite and thermal injuries. A similar trend occurred in the United States after the Iraq War although on a smaller scale — American EMT teams are now much more likely to have tourniquets within reach to treat bleeding from gunshot wounds, a direct lesson from soldiers’ experiences in Iraq.

In 2018, Russia today is rebuilding its post-Soviet military into a force capable of fighting a large-scale war with NATO. Russia’s Western frontiers are seeing new mechanized divisions form up, with soldiers wearing new uniforms and carrying the latest hardware. They have new rifles, tanks, radios and advanced electronic warfare equipment which is equal to the world’s best.

However, Russia is lacking a medical backbone that can absorb the shock of a major conflict, according to an influential Russian military journal. The result will likely result in an overwhelmed medical system and excessive loss of life for Russian soldiers were they to go into battle with the West.

The Russian medical system may even have difficulty handling casualties in Ukraine, as there are few hospitals near the border, with the existing ones in Bryansk, Orel, Kursk and Belgorod, according to the paper VPK, or Military-Industrial Courier.

“All these cities will immediately find themselves in the firing zone,” the paper warns, putting priority on treating the civilian population before soldiers.

Near Russia’s western border, the primary hospital near a future front line is in Podolsk and has 2,000 beds. At the beginning of major hostilities, Russia could quickly suffer some 100,000 casualties.

Despite the military build-up in this region, there has “been no corresponding increase in military medical facilities,” O.E. Watch, the monthly newsletter of the U.S. Army’s Foreign Military Studies Office, stated when observing the concerns in VPK.

Secondly, the Russian health care system suffers from “poor-quality (to put it mildly) care” and a “lack of qualified doctors,” VPK noted with concern.

While Russia retains a public health care system, it is underfunded and has encountered two blows — the first being the collapse of the Soviet Union in 1991, followed by a recovery and then the 2014 Russian financial crisis following the fall in oil prices and imposition of Western sanctions. There is simply not enough funding, which means shortages of doctors, hospitals and equipment — adding up to long wait times.

This is pronounced in rural areas where medical care is akin to a developing country, if medical providers exist at all — some 17,500 towns and villages have zero, according to Newsweek.

Those who suffer from the paucity of care are often veterans. The article notes that Anatoly Khrulyov, a retired general of the Soviet anti-aircraft missile forces, excoriated the poor state of veterans care in Russia during a recent veterans conference.

“In the Zarya settlement near Moscow, for example, where mostly military men and their families live, out of nine therapists there was only one […] Hyupenen called the situation with the medical care of veterans a complete disgrace,” the newspaper stated.

“In the Zvenigorod military sanatorium, the general and his wife could not even take a blood test. From hospitals, he said, patients wait untreated.”

In the event of a conventional war, this same overburdened system will have to absorb tens of thousands of casualties — and suddenly.