The 1 Sure Thing That Could Destory a U.S. Navy Aircraft Carrier (And Quickly) 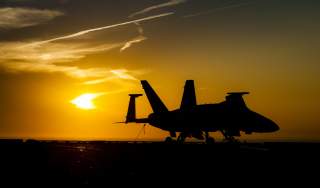