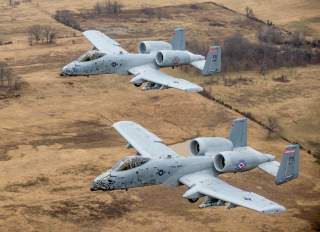 In a fast and furious engagement, Solomonson and Marks took out eight more tanks, six with Mavericks and two with cannon fire.

The Fairchild Republic A-10 Thunderbolt II was designed for close air support (CAS) of friendly ground troops, attacking armored vehicles and tanks, and providing quick-action support against enemy ground forces. It entered service in 1976 and is the only production-built aircraft that has served in the U.S. Air Force (USAF) that was designed solely for CAS. Its secondary mission is to provide forward air controller – airborne (FAC-A) support, by directing other aircraft in attacks on ground targets. Aircraft used primarily in this role are designated OA-10.

The A-10 was used in combat for the first time during Operation Desert Storm in 1991, destroying more than 900 Iraqi tanks, 2,000 other military vehicles and 1,200 artillery pieces.

As the ground war slipped into its second day, with allied tanks and troops rolling across the desert sands, the venerable A-10A ‘Warthog’ continued to prove its low-tech mettle against Iraqi armor. There were dozens of anti-tank sorties on the morning of Feb. 25, but one which stood out was flown by a pair of A-10A pilots who set a record of sorts, as explained in the book Gulf Air War Debrief. A large column of Iraqi tanks was rolling south from areas occupied by the Republican Guard. Captain Eric Solomonson and Lieutenant John Marks of the 76th TFS/23rd TFW scrambled to engage them.

Solomonson arrived over Iraq at sunrise. Solomonson and Marks, after considerable action already, were surprised to see no anti-aircraft fire coming at them. The way was paved by a FAC in an OA-10, who confirmed that no friendlies were in the area. “You guys can just go in there and start shooting.”

A haze shrouded the target area where some Iraqi tanks were smoldering from earlier A-10A attacks. Others had scattered. Some were pulling off both sides of the road, while others tried to hide in prepositioned revetments. Marks came up with the idea of straightening out the confusion by following  the tracks where they had churned up the sand. “At the end of the track there was the hot spot — a tank.”

The A-10A pilots, carrying infrared AGM-65 Maverick missiles and 30-mm ammunition (1,174 rounds), swooped through the haze and attacked the tanks. The Maverick missiles, which detect and home heat sources, had unusually rich targets with the tank engines running and extremely hot. It took 10 minutes for the pair to kill six tanks with Mavericks. Two more fell beneath the driving force of the A-10’s 30-mm GAU-8/A seven-barrelled cannon.

Throughout the day, the A-10A pilots were to see T-62s and at least one T-72 – the principal tracked vehicles of Iraq’s armory.

No one in uniform likes war, but as he pulled off and looked back at eight tanks burning and exploding, ammunition cooking off and creating a furious spray behind him, Solomonson thought, “For an A-10 pilot it just doesn’t get any better than this.”

Rather than return to their original base, the ‘Warthogs’ set down at a FOL (Forward Operating Location) where they refueled and re-armed. At first, the pilots thought they would be instructed to shut down and simply sit alert. Instead, an operations officer found Solomonson and shouted, “Get saddled up again! Go!” Marines needed help just southwest of Kuwait City. Solomonson and Marks were told to get there, fast.

The duo’s second mission was more intense than the first – more like what had been predicted for a high-intensity conflict. A Marine F/A-18 Hornet flying ‘Fast FAC’ told the approaching A-10A pilots that two AV-8B Harriers had already been hit. One was down and the other was leaving the area on fire, the pilot preparing to eject.

The Marine pilots had had a real ordeal. The second Harrier pilot apparently succeeded in getting back to safety without having to eject. In the first AV-8B, Captain Scott Walsh of squadron VMA-542 ejected, making a shaky but safe parachute landing. He was eventually rescued by a Navy SH-60B helicopter – only the third combat rescue of the war. Before the SH-60B appeared, Solomonson and Marks got on the air with an offer to help out in the search and rescue for Walsh, but the FAC told them to continue on because he had enemy tanks on the ground and the Americans on the ground needed help immediately.

Arriving on the scene, Marks was surprised that American ground forces had pushed so far forward. “The targets were parked in revetments on both sides of a major road running west out of Kuwait City.”

In a fast and furious engagement, Solomonson and Marks took out eight more tanks, six with Mavericks and two with cannon tire.

Their long day was not finished.

The pilots returned to their main base, re-armed, and launched again to support Marines who were now probing at the outskirts of Kuwait City. The A-10A pilots were told to remain on station while Saudi artillery fired into the target area. Then, the A-10As moved in and set seven more tanks afire.

Says Marks, “We called in our bomb damage assessment to the wing operations center and they said we’d set an all-time record for Maverick and bullet [cannon] kills.”

As Solomonson explained the success of the A-10, “We’re impressing a lot of people. We’re coming in with more confirmed bomb damage than any other jet. No kidding, see the targets and know they are destroyed. We also only report the stuff we see blowing up or on fire. The other jets that fly a lot faster, a lot higher, but don’t drop nearly as much stuff, nor can they hang out in the target area as long as we can.”