100 Billion Reasons Why: Why Australia Said No to American Missiles Aimed At China 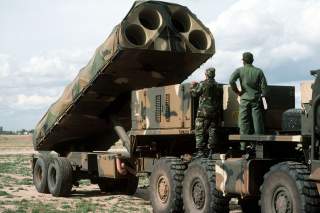 Australia has a close defense relationship with America. But that doesn’t mean Oz wants to jeopardize its relations with China by allowing the United States to station missiles on its territory.

Both Prime Minister Scott Morrison and Defense Minister Linda Reynolds have quashed the notion that American intermediate-range missiles—which would be aimed at China—could be stationed in northern Australia. Their responses came after U.S. Defense Secretary Mike Esper said that the U.S. hopes to station intermediate-range missiles in Asia, leading to speculation that Australia would be a prime candidate.

Esper’s statements came after the United States withdrew from the 1987 Intermediate-Range Nuclear Forces (INF) Treaty between the United States and the Soviet Union, which banned land-based ballistic and cruise missiles with a range of 500 to 5,500 kilometers (300 to 3,400 miles). The treaty has been hailed by arms control experts for heading off a nuclear arms race between the U.S., and the Soviet Union/post-Communist Russia. But the Trump administration has withdrawn from the treaty after alleging Russian violations. China isn’t an INF treaty signatory, and has amassed a huge ballistic missile arsenal, spurring American interest in developing and stationing intermediate-range missiles in Asia.

But they won’t be coming to Australia. “It’s not been asked of us, not being considered, not been put to us,” said Morrison. “I think I can rule a line under that.”

Malcolm Davis, a senior analyst at the Australian Strategic Policy Institute, sees advantages for the United States in basing missiles in Australia. “It can certainly base such weapons in Guam, and avoid the problems associated with foreign basing altogether, but Guam is already a high value target for Chinese ballistic and land-attack cruise missiles,” he told the National Interest. “It may be too many eggs in one basket to rely purely on Guam. Basing in Japan—probably Okinawa—generates potential domestic political risks for [Prime Minister] Abe, would inflame the local dispute over the U.S. presence there, and places such weapons even more at risk from PLARF [People’s Liberation Army Rocket Forces] missile systems, including its very large number of short- and medium-range ballistic missiles—not just the DF-26 [an intermediate-range ballistic missile].”

But Australia would be an ideal spot. “A 4,000 kilometer [2,485 mile] mid-range missile based in northern Australia, near Royal Australian Air Force Base Tindal, would certainly be able to strike at China’s bases in the Spratly Islands. If the United States were then to develop a hypersonic glide vehicle for such a weapon, that would cover the rest of the South China Sea, and potentially into southeastern China. That would include Hainan Island.”

Equally important, American missiles would enjoy a secure base on territory belonging to a loyal and stable ally. “Unlike Guam or Okinawa, Australia has wide-open spaces for mobile missiles to hide in, and is much less at risk from Chinese PLARF forces,” Davis said. “China would need to forward deploy the DF-26 into the Spratly Islands, further develop its CH-AS-X-13 ALBM [missile defense] system, or use other means to attack U.S. missiles based in Northern Australia, and they’d also have to establish a kill chain with pervasive sensor coverage. That’s certainly not impossible for China to do, but it’s not a trivial matter either.”

For Australia, hosting these missiles would tighten its security relationship with the United States, signal American commitment to the region at a time when some of America’s Asian allies are beginning to have doubts, and bolster Australian defense in the face of the Chinese colossus.

So why isn’t Australia jumping at the opportunity to be a U.S. missile base? Some Australians might object to making Australia a bigger target in a potential U.S.-China conflict (bonus question: will these American missiles be capable of carrying nuclear warheads?).

But most important is Australia’s hundred billion-dollar trade relationship with China. “My view is that the current government is trying to maintain its delicate balance on the tip of a strategic triangle with its vital strategic relationship with the United States on one side, and its important trading relationship with China on the other,” said Davis. “This balancing act can’t last for too much longer, as Chinese political warfare activities against Australia and its regional interests increase. At some point, Australia will need to make some tough choices about its strategic future.”