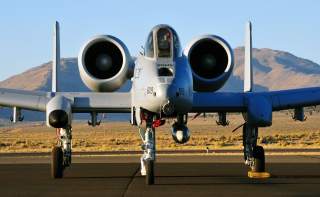 According to Brig. Gen. Scott Pleus, who is member of the the F-35 Joint Strike Fighter (JSF) program’s integration office, the close air support (CAS) flyoff between the F-35 and A-10 could start as early as next year.

“It’ll be a very interesting test,” said Pleus, a former U.S. Air Force (USAF) F-16 Fighting Falcon pilot to DOD Buzz. “The A-10 was built to deal with tanks in Europe, a low, slow, big cannon on the front of it meant to destroy tanks and assist troops in contacts and do [close-air support]”

(This article by Dario Leone originally appeared on The Aviation Geek Club in 2017.)

The first production A-10A was delivered to Davis-Monthan Air Force Base (AFB), Ariz., in Oct. 1975, while the upgraded A-10C reached initial operation capability in September 2007.

The Thunderbolt II has excellent maneuverability at low air speeds and altitude, and is a highly accurate and survivable weapons-delivery platform. The aircraft can loiter near battle areas for extended periods of time and operate in low ceiling and visibility conditions. The wide combat radius and short takeoff and landing capability permit operations in and out of locations near front lines. Using night vision goggles (NVG), A-10 pilots can conduct their missions during darkness.

The Hog (as the A-10 is nicknamed by its aircrews) is built around the powerful GAU-8/A Avenger 30mm cannon, capable of firing 3,900 rounds per minute to defeat a wide variety of targets including tanks.

Pleus explained that the A-10 would come out “as the better CAS platform” in a no-threat environment against the F-35, which performs similarly to the Fighting Falcon. But “as you now start to built the threat up, the A-10s won’t even enter the airspace before they get shot down — not even within 20 miles within the target.”

Actually because of its stealthiness and enhanced situational awareness, the F-35 will have an edge over the A-10 in contested or “non-permissive” operating environments.

Moreover as reported by DOD Buzz, Pleus added that “A single-platform A-10 that only does CAS and can’t do anything else and it has to be in an uncontested environment is probably not a realistic place for us to be continuing funding…for the future. If I were to develop that plan you have to show that the close air support is not just in a no-threat environment, because CAS is not always in a no-threat environment.”

However which platform fits better the CAS role remains to be seen: in fact the test between the A-10 and F-35, which will be structured and certified by the Defense Department’s Operational Test and Evaluation Office, is still under development.

“When we get to the actual testing I think that’s where you’re going to see the differences,” Pleus concluded.