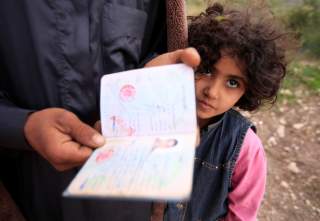 Remember former President Barack Obama’s infamous red line speech in 2012? In that speech, the president made it clear that the U.S. would not stand for the use of chemical or biological weapons by President Bashar al-Assad against opposition forces in Syria.

But, despite subsequent evidence of the use of these weapons by Assad’s forces, the U.S. declined to directly confront the regime.

A complex, devastating conflict has continued ever since, killing close to 400,000 Syrians and forcing millions from their homes. It has involved a range of players over nine years: the Assad-controlled government regime, various rebel opposition groups, the Islamic State, Syria’s Kurdish minority and major international powers, including the United States, Iran, Turkey, Russia and the European Union.

Consequently, some confusion about current events and what they mean is understandable. So, here are some answers to key questions about why Syria is back in the news.

The war in Syria has resulted in more than 11 million people displaced. Over half of these displaced people are refugees, with the vast majority currently hosted in the regional states of Turkey, Lebanon and Jordan.

The war has now reached a crisis point. Since December, the Russian-backed Assad regime has significantly increased air and ground assaults on civilian sites in Idlib province, causing destruction and mass displacement.

Idlib is considered the remaining stronghold of the rebel opposition to Assad’s regime. Lying in the northeast of Syria bordering Turkey, it is home to approximately 3.5 million people.

The United Nations has repeatedly called for an immediate cessation of hostilities. Nonetheless, the assaults continued.

2. How many people are fleeing?

Since December, nearly 950,000 people, an estimated 80% of whom are women and children, have fled their homes because of ground and air assaults by the Russian-backed Assad forces during an uncharacteristically cold winter.

Many live in makeshift displaced persons camps in northern Syria. Reports show that women are burning plastic to keep warm, and babies and children are dying due to the cold.

The U.N. estimates that close to 2 million Syrians are in need of humanitarian assistance. While aid is being delivered, it is insufficient to meet the needs of families for food, clean water and heating.

3. Why is this considered a humanitarian crisis?

However, Turkey has effectively closed its borders to those fleeing from Idlib, noting it already hosts over 3.6 million Syrian refugees.

Some reports put the death toll around Idlib in the thousands. The U.N. has recorded hundreds of deaths in Idlib and Aleppo due to the recent attacks, which are backed militarily by Russia. Many medical facilities and schools have been targeted or impacted.

Experts claim that the attacks are part of a strategy to explicitly target civilians. Such targeting of civilians, schools and hospitals could be war crimes – grave violations of the law of war.

The U.N. Commission of Inquiry and European courts are investigating crimes committed during the Syrian conflict.

4. Who is involved in this fight?

The conflict in Syria started with a peaceful uprising in 2011 against the four-decade authoritarian rule of the Assad family. Since then, it has become increasingly complicated, involving a number of countries near and far.

Iran has remained a steadfast supporter of Assad throughout the conflict, although its exact military and financial support is difficult to track.

In 2015, Russia, a historic ally of the Assad family, directly entered the conflict to support the government through airstrikes. It controls much of the airspace in northern Syria today.

The United States entered the war as part of a coalition in 2014. It has supported Syrian Kurdish militia, known as the People’s Protection Units, in a joint fight against the Islamic State, which had gained power in parts of Syria. The United States’ support of the Syrian Kurds has consistently rattled Turkey, which links the group to its own Kurdistan Workers Party (PKK), which is considered a terrorist group by neighboring Turkey, the European Union and the United States.

In October, President Donald Trump ordered the removal of U.S. military personnel from northern Syria, abandoning the traditional support by the U.S. for Syrian Kurds and opening up advantages for the Assad regime and Russia.

In response, Turkey intervened militarily to undermine the Syrian Kurds and create a safe zone along its borders. These actions infuriated Turkey’s western allies because it heightened the conflict in parts of the north that had been peacefully governed by the Syrian Kurds.

While Turkey and Russia do not agree on Syria, they have been coming closer since 2015, even overcoming crises like the downing of a Russian aircraft by Turkish forces near the Syrian border.

Turkey, the United States and European Union states are members of the North Atlantic Treaty Organization, known as NATO. Deepening a divide between Turkey and NATO is considered by experts to be in the interest of Russia’s president, Vladimir Putin.

The humanitarian crisis is grave, and the situation in flux. With the fighting around Idlib continuing, international tensions are flaring.

After 33 Turkish soldiers died in an attack by Russian-backed Syrian forces on Feb. 27, Turkey called for NATO to meet and has retaliated in Syria. Russia has denied any involvement in the specific assault.

Neither Turkey nor Russia appears to be decreasing their interventions in Syria.

With Russia wielding a veto power on the United Nations Security Council, the institution responsible for addressing threats to international peace and security has been unable to effectively intervene to halt the conflict and protect civilians.

Many experts contend that the war could be in its final throes and some victory for Assad is no longer in question. For now, the Trump administration has indicated it has no intention of reengaging in Syria to protect the people of Idlib.

However, in such a complex conflict, the delicate balance of interests can be disrupted. For example, Turkey has opened its borders for Syrian refugees to flow into Europe, creating a potential renewed crisis for the European Union.

Turkey has asked NATO for military support for a no-fly zone over Idlib, but has gained no traction so far. Experts agree that the best route to protect civilians would be such a zone and argue the United States must play a role.

Others are calling for an EU-NATO intervention to protect the people of Idlib. The EU is meeting to discuss the crisis.

For now, Turkey is taking on the Syrian forces alone and claiming some success. Russia and Turkey are set to meet to discuss the conflict on March 5.