In 1100 BCE Bronze Age Civilization Was Swept Away. It Should Serve as a Warning to Us Today. Here's Why. 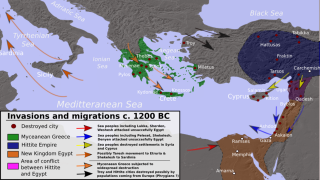 From the Adriatic to the Persian Gulf, from the Black Sea to Nile Valley, the known world is a thriving, humming tapestry of vibrant, powerful societies flush with vibrant cultures. Eight rival civilizations fight, trade and study each other even as they cultivate their kings and arts.

The year is 1250 BCE, some 3,250 years ago. The Greeks of Mycenae, the Minoans of Crete, the Hittites of Turkey, the Egyptians of the Nile, the Mitanni and Babylonians of Mesopotamia, the people of Cyprus and the Canaanites of the Levant, are all engaged and enmeshed in a truly international system with links outward to the Himalayas and the Indian Ocean.

Most of the famous historical figures and events of the Bronze Age—Moses, Ramesses II, the Trojan War—took place in this world. Literate persons of the time read epic poems, love letters and detailed account ledgers in any of several languages and scripts. Powerful militaries armed with fast chariots and battalions of troops imposed their sovereigns’ will across vast swathes of the Middle East. Fleets of merchant ships played the Mediterranean, carrying the wine and spices and above all the metal for the alloy that named the age: bronze.

And yet, by 1100 BCE this whole world and all its splendors were gone. International trade, large complex governments, fine goods production, even writing, all disappeared. For almost four hundred years.

It’s the worst dark age known in Western Eurasian history, one more regressive and stultifying than the more famous collapse of the Western Roman Empire seven hundred years later. Even now scholars puzzle to understand what brought about the end of the Bronze Age in the Eastern Mediterranean and Middle East. But their researches reveal with increasing clarity the dangers inherent in an integrated, interdependent international system, when that system suffers too many shocks in too short a time.

Archaeologist Eric Cline lays out the bright expanse of the Late Bronze Age and its fall in his book 1177 BC: The Year Civilization Collapsed. There was, he says, no one cause, no “smoking gun,” that points to a single failure of the system. Instead, Cline says, the system itself became the problem. The tremendous growth of trade and economic integration that fueled the efflorescence and expansion of the Bronze Age (roughly 3000–1200 BCE) allowed stressors to later propagate rapidly throughout the great civilizations of the region.

In 1250 BCE, the Minoans of Crete had enjoyed chic mansions, masterful art, a rich economy and extensive trade for almost a thousand years. The Egyptians under their New Kingdom pharaohs of the eighteenth and nineteenth dynasties had resurrected their ancient land and made it a military superpower, a predatory colossus gathering the remote Nile and the Levant into its empire.

The Hittite Empire fought the Egyptians to a standstill, and their diplomatic exchanges ended hostilities and established a modus vivendi that ranks with the post-Napoleonic treaty efforts in the annals of international relations. Astute residents of Mari, a Mesopotamian city whose environs would later be fought over by everyone from Greek hoplites to U.S. Marines, noted the flow of strategic materials through their lands in their correspondence.

Archaeologist Carol Ball has compared the role of bronze in the Bronze Age to that of petroleum in our era. The alloy was not only critical to military power but also essential to the economy. Bronze is most often made of 90 percent copper and 10 percent tin (though arsenic can be used). One shipwreck off the coast of Turkey yielded nine tons of copper ingots and one ton of tin— enough metal, says Cline, to fully equip three hundred men with weapons, helmets, breastplates and greaves. Consider the material and cost of equipping two companies of Marines for comparison.

Copper was plentiful in the ancient eastern Mediterranean—the Cypriots of Cyprus earned their name from the metal—but tin was much more difficult to source. Chemical analyses have traced the tin used in the Late Bronze Age to Afghanistan, an unsettling historical parallel. Bronze Age militaries relied on long, vulnerable supply chains.

Into this wealthy, assertive, interdependent world came the inevitable disruptions of climate and social structure. Were drought, famine and social unrest the causes of the collapse? Not really, says Cline, but they destabilized the system.

The Egyptians, Mitanni, Minoans, Hittites, Babylonians and Cypriots might have weathered the prolonged drought now known to have occurred in the latter half of the thirteenth century BCE. They might have coped with internal unrest if food stocks had remained stable or mediocre governance had risen to the challenge. The Minoans had survived and thrived after a cataclysmic volcano, the Egyptians and Hittite Empires had survived invasions before.

But after 1250 BCE, the accumulating and reinforcing effects of drought, earthquake, insurrection, immigration and, especially, the unraveling of international trade, forced thereat powers of the age to succumb. By 1100 BCE only Egypt remained, and it was so weakened that it never fully recovered and became prey to foreign rulers.

Over the next four centuries, new societies arose from the remains of the old Bronze Age world—Greeks and Phoenicians and Etruscans founded new cities in the Western Mediterranean, in Italy, Sicily, France and Spain. New empires arose from the ancient soil of Mesopotamia and conquered the Levant, and, along with other things, exiled the Jews to Babylon.

Though the hard and hard-to-work iron became the new metal of war and work, bronze remained valuable. The need for tin would drive exploration and exploitation for centuries beyond the Bronze Age collapse, to Majorca and Andalusia and Cornwall.

If you think the Late Bronze Age collapse offers uncomfortable parallels to our time, it should. We indulge in a great many post-apocalyptic fantasies, but real post-apocalypses have proven more dire and enduring than our imaginations will conceive. The Late Bronze Age collapse didn’t happen overnight or over a decade or two; it took more than a century.

The current unraveling of the established world system didn’t start with the Middle Eastern/Mediterranean drought of the late 2000s, nor with the Arab Spring, the Iraq War or the Great Recession. But future historians may point to all those factors in accounting for the fall of the postwar order and the decline of the West. History, as Mark Twain is supposed to have said, doesn’t so much repeat as it rhymes.