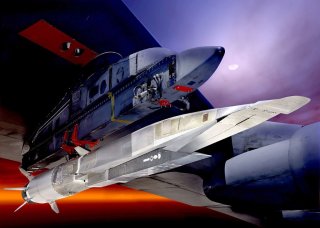 That’s according to a report issued this week by the Government Accountability Office (GAO).

“GAO identified 70 efforts to develop hypersonic weapons and related technologies that are estimated to cost almost $15 billion from fiscal years 2015 through 2024,” the report said. “These efforts are widespread across the Department of Defense (DOD) in collaboration with the Department of Energy (DOE) and, in the case of hypersonic technology development, the National Aeronautics and Space Administration (NASA). DOD accounts for nearly all of this amount.

The hypersonic weapons, described as “technically complex,” fly at five times the speed of sound. None of the weapons have yet reached the production stage.

According to Flight Global, the funding of the projects started to take off after fiscal year 2017, “when it became clear that China and Russia’s missile development had leapt ahead of the USA’s.”

Most of the funding is for product development, and “potential fielding of prototype offensive hypersonic weapons,” GAO said. The government has also invested a great deal of money for “next generation hypersonic weapons and a smaller proportion aimed at countering hypersonic threats.”

The GAO, in its report, called for the Department of Defense to clarify the exact roles and responsibilities of the different agencies doing the work on hypersonic weapons, so as to “ensure consolidation across development efforts.”

The Department of Defense has concurred with the recommendation, the GAO report said.

The DoD last month named hypersonic weapons as one of the higher-priority weapons areas.

“We will deliver strike capability to the warfighter in the early-mid 2020s and a layered hypersonic defense capability — first terminal and then glide phase — in the mid-late 2020s," Mike White, principal director for hypersonics in the office of the undersecretary of defense for research and engineering, said earlier this year. "For reusable systems, our goal is to deliver capability in the early to mid-2030s."

While the Department of Energy and NASA have reached agreements with the Pentagon to work together on the technology, the Department of Defense “has not documented the roles, responsibilities, and authorities of the multitude of its organizations, including the military services, that are working on hypersonic weapon development.”

It was reported last week that the Navy is looking into what it would take to equip its Zumwalt class stealth destroyers with hypersonic missiles.